Disclosure: I received a copy of Maple from Quirk Books to review, with permission to excerpt the recipe for this Potato and Sausage Breakfast Skillet. As always, all opinions expressed are my own.

Have I mentioned that I’m something of a cookbook fiend?

I’m that girl who approaches a new cookbook like a novel. When the weather starts to get cooler, there’s nothing like curling up on the sofa with a cup of something warm and getting lost in a new collection of recipes. I especially love when a book finds new ways to use old favorite ingredients, giving new life to nostalgic flavors.

Katie Webster’s Maple does just that. With 100 recipes from cocktails and cakes to salads and chilis, Webster’s creative use of maple syrup takes readers far beyond standard breakfast fare.

I’ve enjoyed several recipes from the book since its arrival, one of which was this Potato and Sausage Breakfast Skillet with Greens. A hearty twist on a breakfast classic with a hint of sweetness in the background, this skillet would be a nice addition to any breakfast or brunch table.

Reading the introduction to Maple, you know you’re about to dive into a heartfelt cookbook.

Webster and her husband live in Vermont, where they enjoy “backyard sugaring” as a hobby, tapping trees and processing the sap at home by boiling it into syrup. I can’t say that I’m not a little jealous of this pastime! What an interesting and fun endeavor, not to mention an amazing gift to be able to share with family and friends.

In truth, maple syrup is pretty much woven into the fabric of American breakfast culture. Webster writes of her hope that her cookbook will evoke special memories for her readers, and shares some of the charming recollections that maple syrup brings to the forefront of her mind.

As a collection, the recipes feel as genuine as they are versatile, spanning not only a range of courses, but also seasons.

My mind tends to gravitate toward fall when I think of maple syrup, but with recipes such as Maple Margaritas, Swordfish with Maple Pipérade, and Sweet and Sour Coleslaw, Webster demonstrates how versatile maple syrup can be as an ingredient for year-round use.

Webster’s breakfast skillet was a nice combination of traditional morning fare—potatoes and sausage—with an addition of kale for a nutritious twist. The maple syrup provided a hint of sweetness that was present, but not overly assertive.

The recipe doesn’t specify that the skillet should be served with eggs, but I went for it. We loved allowing the velvety yolks to mingle with the potatoes, sausage, and kale. It was actually lunch time before I finished the photos the day I made this, but that didn’t stop us from digging in.

As Maple so aptly demonstrates, there is no wrong time of day to enjoy one of nature’s best sweeteners! 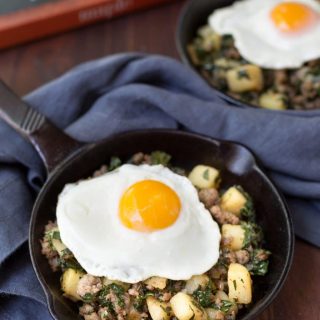 Calories: 246kcal | Carbohydrates: 19g | Protein: 10g | Fat: 13g | Saturated Fat: 2g | Cholesterol: 90mg | Sodium: 663mg | Potassium: 472mg | Sugar: 6g | Vitamin A: 1575IU | Vitamin C: 22.7mg | Calcium: 60mg | Iron: 1.4mg
About our Recipes:Please note that our recipes have been developed using the US Customary measurement system and have not been tested for high altitude/elevation cooking and baking.
Have you made this recipe?Don’t forget to leave a comment and rate the recipe below! Take a picture and tag @stripedspatula and #stripedspatula on Instagram for a chance to be featured in our Insta Stories and newsletter!