Buttery, sweet braised leeks meet a bright, mildly-tart dill-yogurt sauce. Great as a light vegetarian lunch or a side dish for broiled fish and meats. 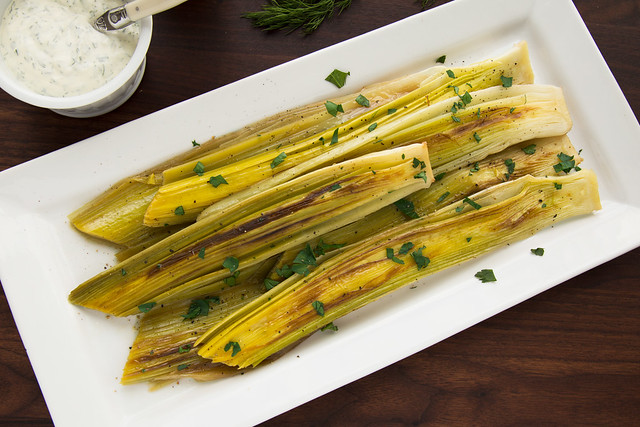 I don’t know if I’ve mentioned this yet, but I’m something of a leek fiend.

The first time I saw them in the market bin, many years ago, I thought they were some kind of gargantuan scallion on steroids. While leeks are a member of the onion family, I soon came to learn (and love) their much more delicate flavor.

I find just about every excuse I can to cook with them. As an aromatic, leeks are great in a supporting role in everything from omelettes and quiche to soups and risotto.

When they’re in their prime (usually late-fall through early-spring), nothing makes me happier than dishes that allow the leeks themselves to be the star of the show.

I love grilling them and serving them as a side dish with a light vinaigrette, as the base for fritters (one of my favorite Ottolenghi recipes), and as I’ve done here, braised and served with dill sauce. 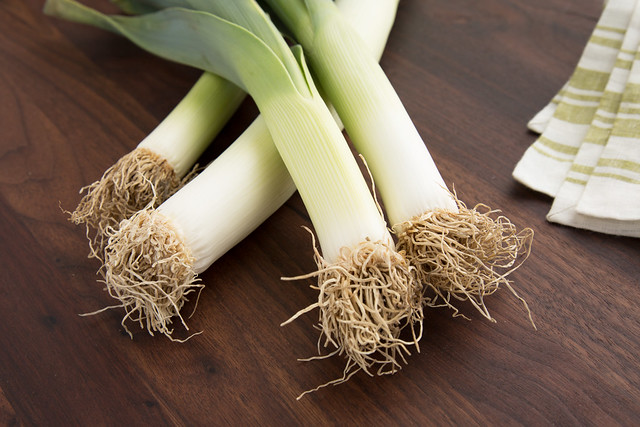 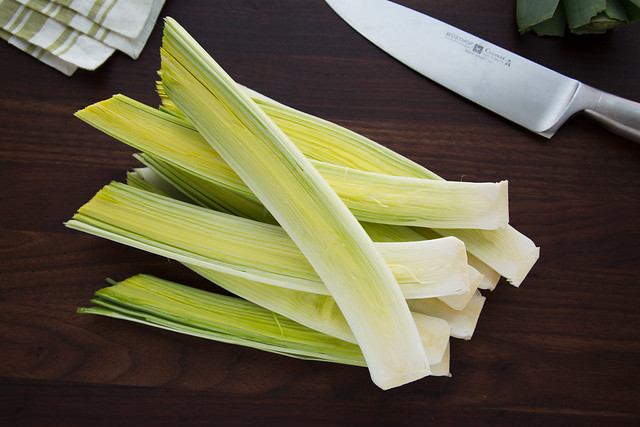 The main inspiration behind this recipe is Diana Henry’s book, A Change of Appetite, in which she tosses steamed leeks with olive oil, yogurt-dill sauce, and sumac. I’ve been on a bit of a sumac kick for a while now (a bright, lemony spice prevalent in Middle Eastern cooking), so when I came across Henry’s recipe, I instantly fell in love.

We really enjoyed the richness that the braising process lends to the leeks, against the bright, mildly-tart flavors of the dill sauce and sumac. Instead of tossing the leeks in the sauce, we found that we liked them best dolloped, so that the sweet, braised flavor could really shine through. 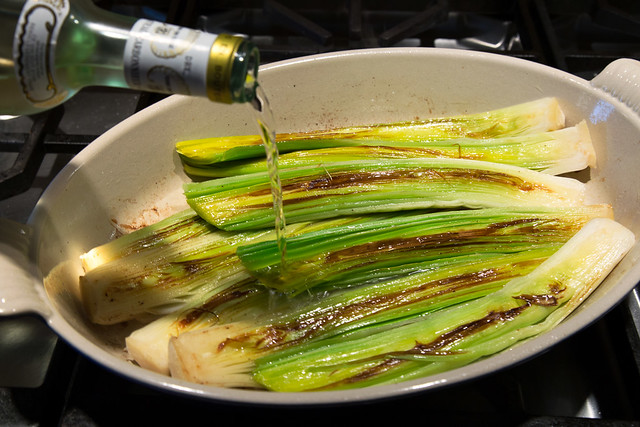 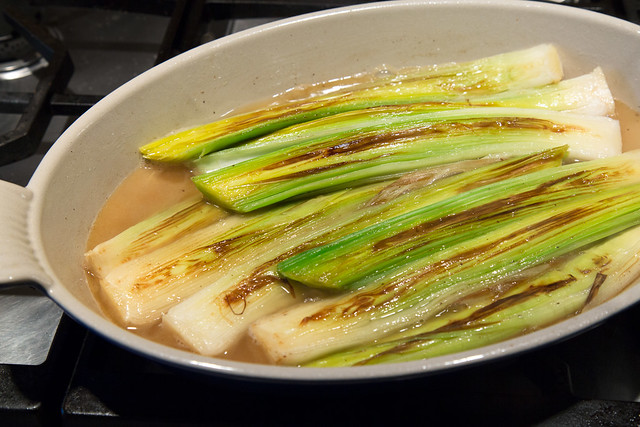 If there’s one point I can drive home about working with leeks, it’s this: wash them thoroughly! The leeks’ beautiful layers give them a wonderful texture, but they’re also the perfect hiding place for dirt and sand. A mouthful of leek grit will pretty much ruin a recipe (been there, done that, got the medal for a memorable batch of risotto in my early 20’s—not my finest creation!).

Don’t let this deter you; leeks are easy to clean.

When working with chopped or sliced leeks, I separate the layers and swish them around in a bowl of cold water, letting them soak for a few minutes before scooping them from the top (the grit will fall to the bottom of the bowl). I like to give them a final “good measure” rinse in a colander before cooking.

When the root end is left intact and the entire leek sliced in half (as in this recipe), I gently fan out the layers and use the spray nozzle on my kitchen sink to direct cold water between them until I’m satisfied that they’re clean. 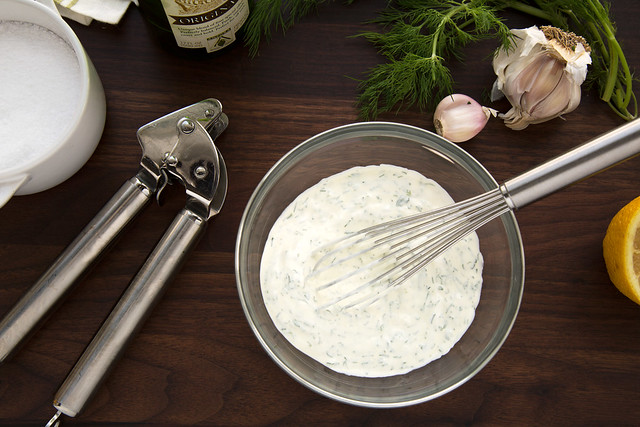 Braised Leeks with Dill Sauce are great for a light vegetarian lunch, perhaps with a slice of crusty bread on the side, or some spring greens, lightly-dressed with olive oil and lemon.

I’ve also served these as a side dish to broiled fish with a crisp glass of white wine.

This dish is very good served hot, but we like the leeks best just slightly warm or at room temperature. I think the sweetness really shines when they’re a bit cooler.

If you happen to have leftovers, which I did when making these for this post, a quick trip to the blender with some chicken broth turns the leeks into a delicious soup (instructions in recipe notes). 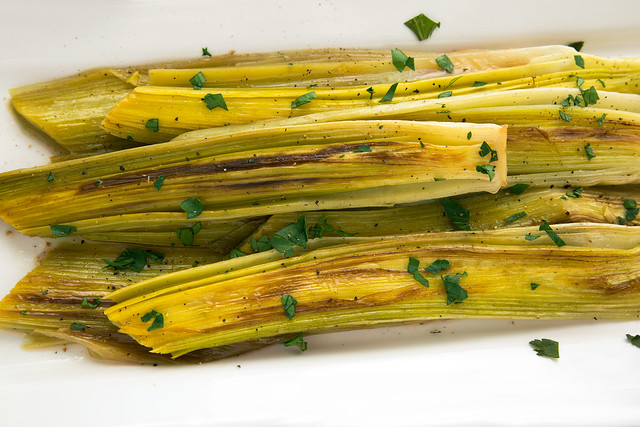 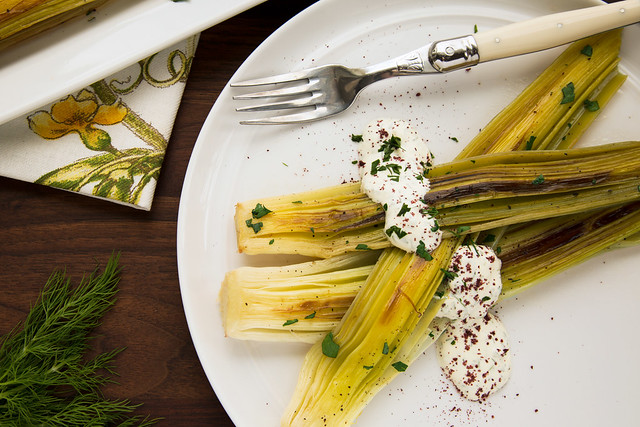 With their beautiful palette of yellows and greens, leeks are a great way to bring a pop of color into your winter menu (especially on days like today when the thermometer is reading a balmy 8 degrees).  Think Spring, everyone! 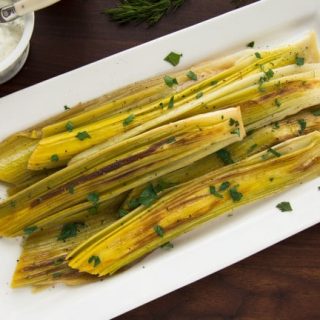 To Braise the Leeks

To Make the Sauce and Serve

To Braise the Leeks

Make the Sauce and Serve

<p>*Brands of Greek yogurt vary in tartness. Start with 1-1/2 teaspoons of lemon juice and adjust to taste. I use either full-fat or 2% yogurt here, which is usually milder in flavor.</p> <p>**Jumbo leeks might not fit in your pan in a single layer. In this case, brown the leeks in two batches, adding additional butter and olive oil to the pan between batches as needed. Return all leeks to the pan before deglazing with the wine; it's okay if they overlap while braising.</p> <p>***Since braised leeks have a decent moisture content, I like to serve the sauce on the thicker side. If you prefer a thinner sauce, add a little milk or buttermilk to taste.</p>

<p>Leftover braised leeks make a delicious Leek Soup! Just place the leeks in a blender or food processor (I use my Vitamix) with a little chicken or vegetable broth. Blend until the soup reaches your desired consistency, adding additional broth as needed. Heat, season with salt and pepper to taste, and serve with a dollop of dill sauce.</p>

Calories: 258kcal | Carbohydrates: 27g | Protein: 4g | Fat: 13g | Saturated Fat: 4g | Cholesterol: 15mg | Sodium: 307mg | Potassium: 403mg | Fiber: 3g | Sugar: 8g | Vitamin A: 3245IU | Vitamin C: 25.2mg | Calcium: 137mg | Iron: 3.9mg
About our Recipes:Please note that our recipes have been developed using the US Customary measurement system and have not been tested for high altitude/elevation cooking and baking.
Have you made this recipe?Don't forget to leave a comment and rate the recipe below! Take a picture and tag @stripedspatula and #stripedspatula on Instagram for a chance to be featured in our Insta Stories and newsletter! 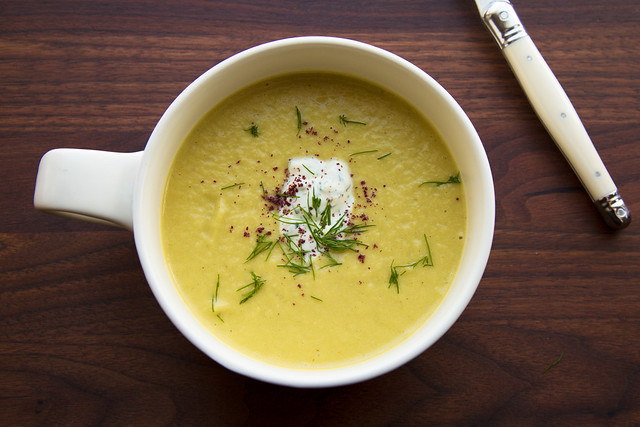