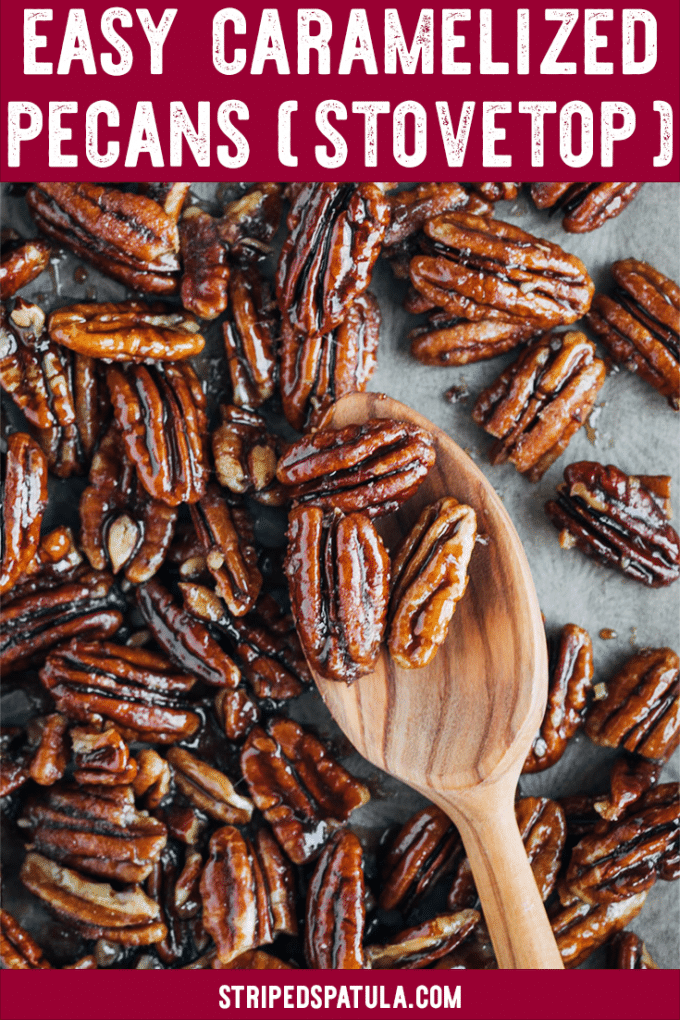 These Caramelized Pecans are a cinch to make on the stove, and you can customize them to be spicy, or salty, too! Great for salads, desserts, and cheese boards. 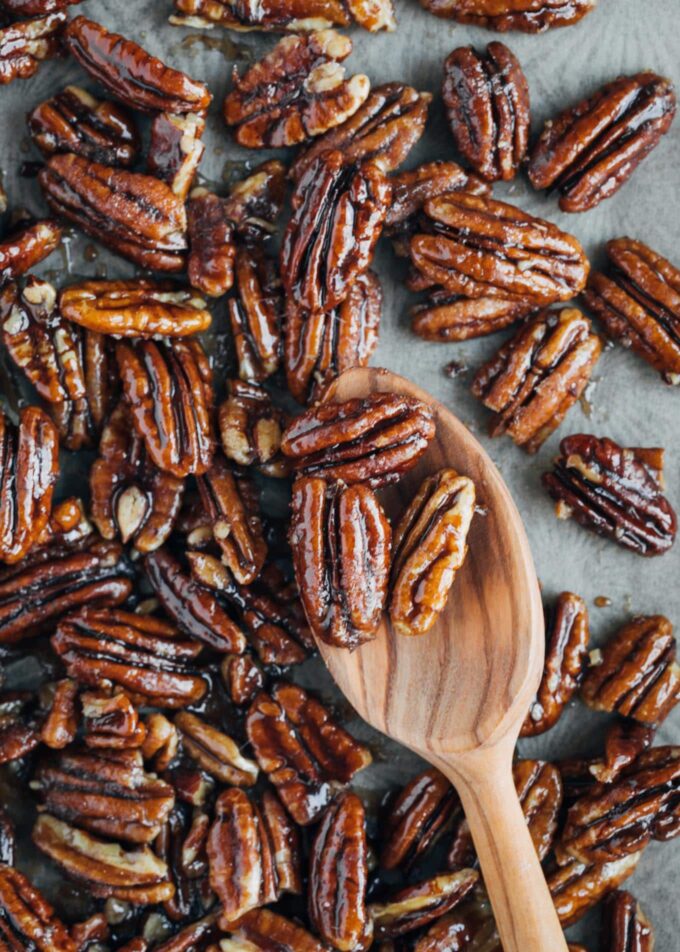 I love caramelized pecans. What’s not to love when we’re talking about warm, toasty pecans enrobed in a luscious brown sugar glaze?

For the longest time, I bought caramelized pecans in containers at my local market’s gourmet cheese counter. That is, until I realized how incredibly simple they are to make at home. Caramelized Pecans on demand? Don’t mind if I do!

These pecans are perfect to serve for a game day snack, a holiday appetizer board (lovely with cheese), topping Pumpkin Pie, or sprinkling on top of your favorite fall salads (like, this Pear Salad with Warm Bacon Vinaigrette.) 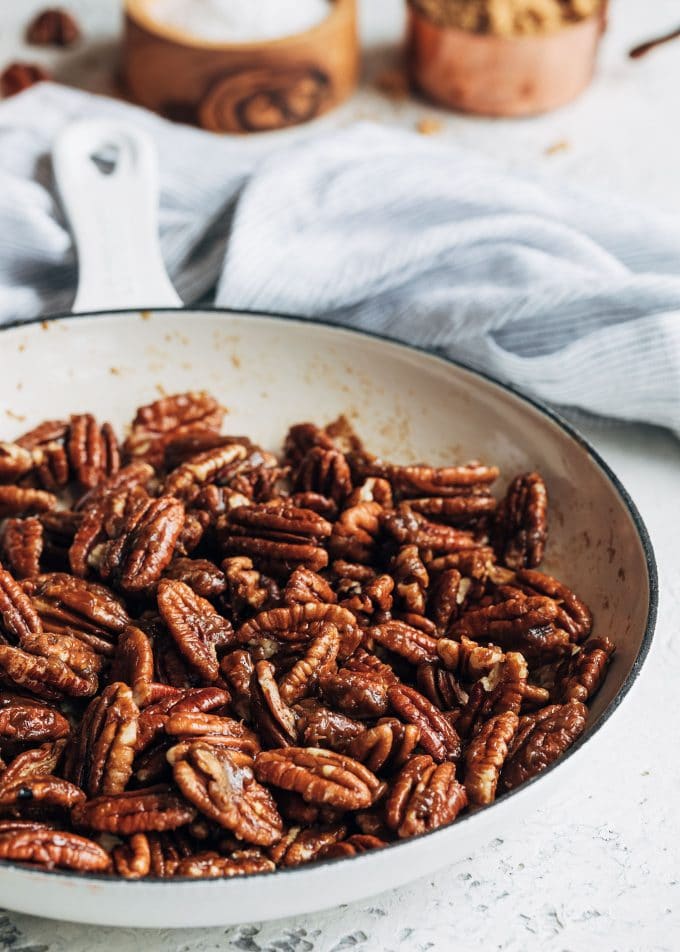 I have a distinction in my own mind between what constitutes a Caramelized Pecan versus a Candied Pecan. In all honesty, the terms are pretty much used interchangeably, but to me, they separate two different types of sweet pecan preparations.

In my mind, Caramelized Pecans, like the ones in this post, are coated in a glossy sugar glaze. When I hear Candied Pecans, I think of pecans with a more sugary-looking, crunchy coating, such as these. Another way to separate the difference I’m looking to describe here would be to call one “glazed” pecans and the other “sugared” pecans.

How to Make Caramelized Pecans

So, today, we’re talking about the caramelized variety.

In terms of tools, all you need is a nonstick skillet and a parchment-lined cookie sheet, and you’ll be well on your way to having a batch of these on your table.

Just melt together brown sugar and a little water in a skillet on the stove until bubbly, toss in your pecans, and stir until toasty and caramelized. That’s it! 5 minutes on the stove, and then about an hour for the pecans to fully set up at room temperature. 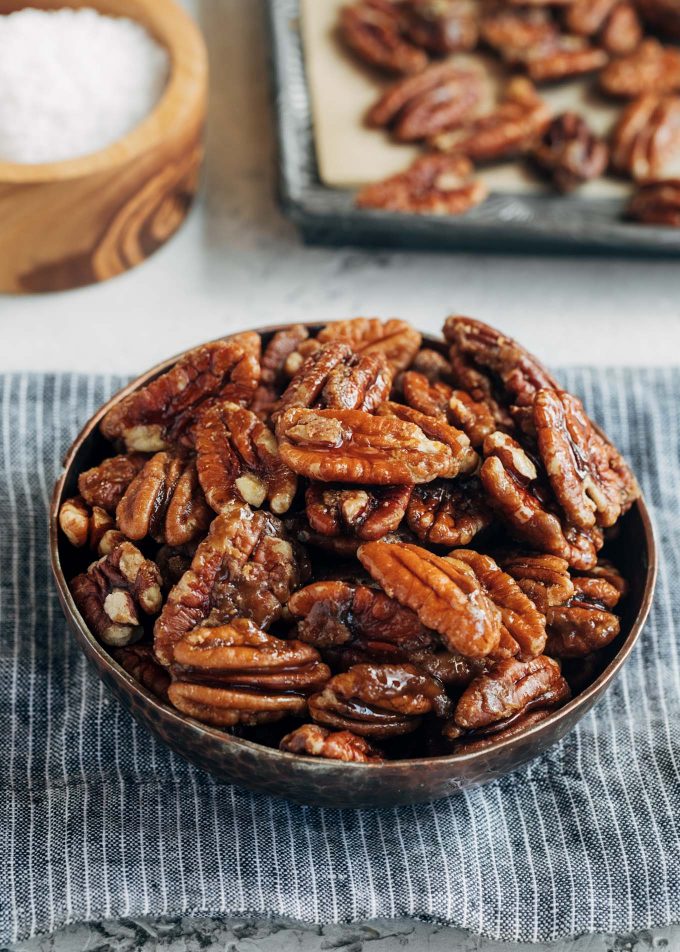 The great thing about making Caramelized Pecans at home is that you can customize the flavor. Want a hint of fall spice? Add some ground cinnamon or pumpkin spice. Want sweet pecans with some heat? A little cayenne will do the trick.

Personally, I like them sprinkled with flaked sea salt for a sweet-salty combo.

I like to mix up a few batches at a time during the holiday season so I have them on hand for various uses: sweet or cinnamon for desserts, salted or spicy for appetizers and snacks. You can even freeze caramelized pecans for up to two months, making them convenient for planning ahead! 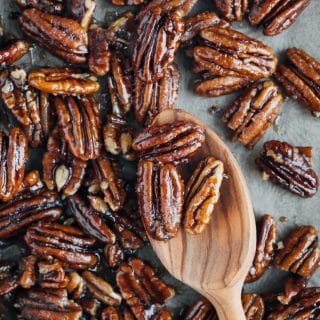 Calories: 223kcal | Carbohydrates: 16g | Protein: 2g | Fat: 17g | Saturated Fat: 1g | Sodium: 4mg | Potassium: 119mg | Fiber: 2g | Sugar: 14g | Vitamin A: 15IU | Vitamin C: 0.2mg | Calcium: 29mg | Iron: 0.7mg
About our Recipes:Please note that our recipes have been developed using the US Customary measurement system and have not been tested for high altitude/elevation cooking and baking.
Keywords: candied pecans, caramelized pecans, stovetop candied pecans
Have you made this recipe?Don't forget to leave a comment and rate the recipe below! Take a picture and tag @stripedspatula and #stripedspatula on Instagram for a chance to be featured in our Insta Stories and newsletter!