These Asian Style Short Ribs are braised in the slow cooker until the meat is fall-apart tender and infused with classic Asian flavors. Serve them with a crunchy Daikon salad for an easy and impressive winter meal. 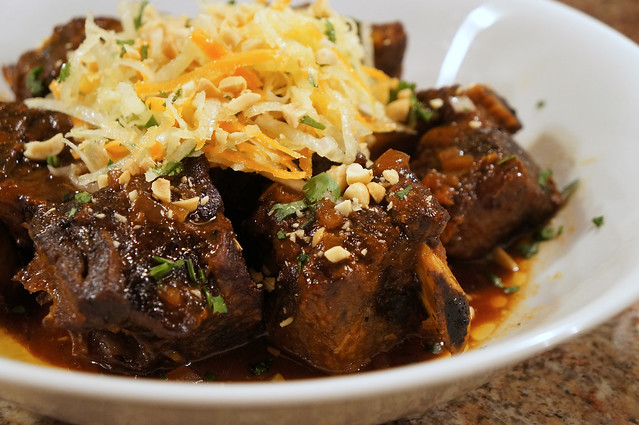 Remember that slow cooker I bought back in December? Despite my fears that it might become another dust-gatherer on my countertop, we’ve become friends this winter.

Throughout the unending stream of polar vortexes and snowstorms Mother Nature has unleashed on the Northeast, my trusty slow cooker has been at the ready with warm, comforting, house-filling aromas.

At the very least, anticipating the grand lid removal at the end of a day spent cooped up in the house kept me amused enough to avoid cabin fever. 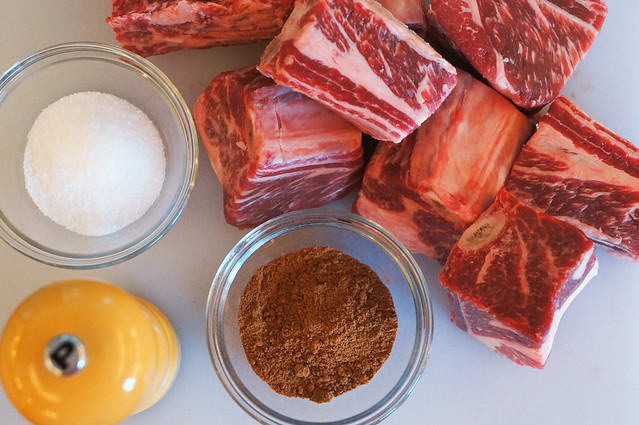 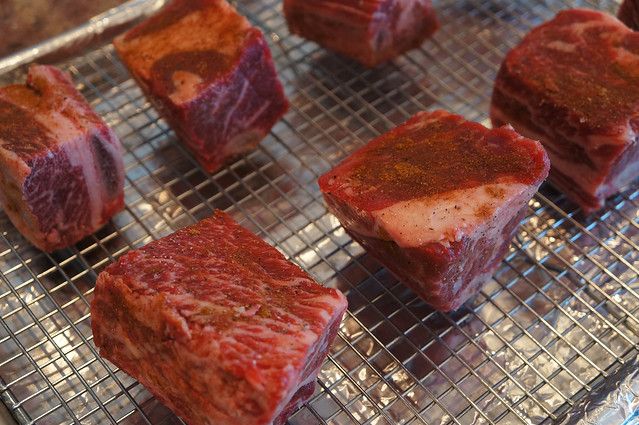 I’ll be honest: not all of the slow-cooker recipes I’ve tried have called out the cheer squad in my house.  The flavors of my Lasagna Bolognese, for instance, were incredibly well-developed from the minute I lifted the lid (think second-day flavor), but the noodles were far too soft. (Three scoopable, messy lasagnas later, I threw in the towel and decided to stick with the oven. If it ain’t broke, don’t fix it.)

Other dishes have found their way into my bookmarked recipe list: A delicious Ratatouille that was enjoyed for days (and cleared out the vegetable bin!), Mushroom Barley Soup, and this recipe from Brigit Binns’ The New Slow Cooker (Williams-Sonoma) for Asian Style Short Ribs. 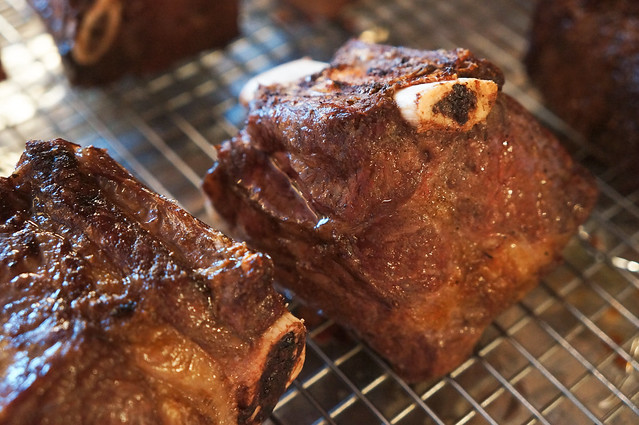 Binns ups the flavor ante in this dish by browning the short ribs under the broiler before braising in the slow-cooker. Broiling not only gives the meat itself a more well-developed flavor, but also lends some pretty delicious drippings to the braising liquid, and eventual sauce. (Not to mention that the aroma of toasted Chinese five spice powder is a treat in and of itself.)

Eight hours after being stacked into the slow cooker, the short ribs were tender, moist, and falling off the bone. Add the accompanying salad, and I was enjoying dinner so much that I nearly forgot about the mounds of snow piling up outside of my door. 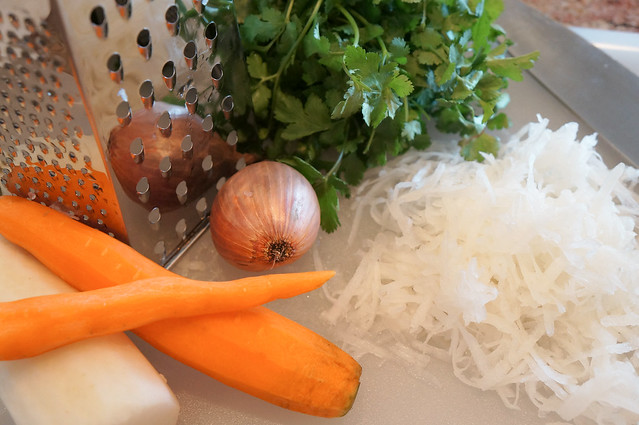 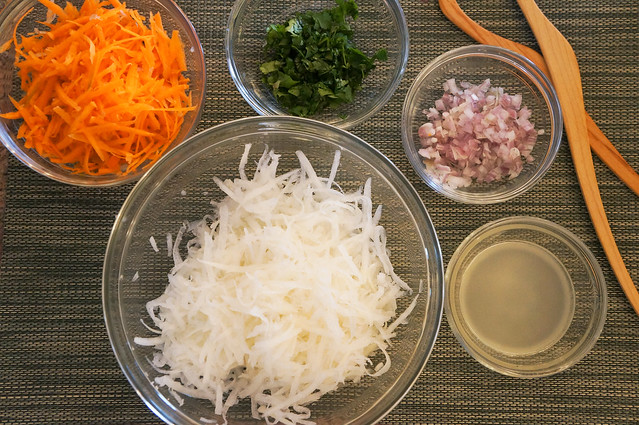 Speaking of the salad, if there’s one theme to Binns’ slow cooker approach, it’s this: awaken the flavors of slow-cooked food with something fresh upon plating—a vegetable, a unique salad, or even just a handful of chopped herbs. It’s a simple notion, but one that’s absent from so many slow cooker recipes.

Here, Binns recommends a Daikon (Asian radish) and Carrot Salad with a light peanut vinaigrette. The salad cut through the richness of the short ribs and turned what might’ve been a “good” dish into a delicious meal. 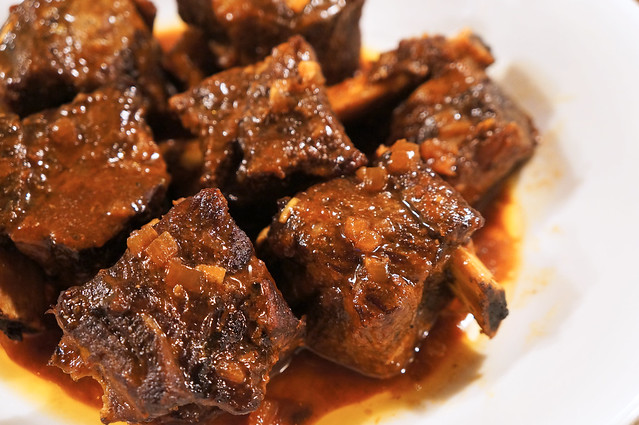 With a book full of slow cooker recipes still left to explore (Orange-Braised Pork, anyone?), I might almost be ok with the latest weather models showing another whammy of a snow event heading its way up the coast next week.  Almost. 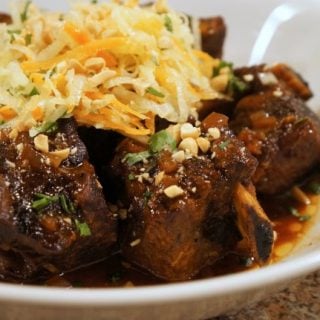 For the Short Ribs:

For the Daikon Salad:

*English-cut are the shorter, fatter-looking short ribs you'll find in the butcher case (as compared to "flanken-cut," which are longer and flatter.)

Calories: 1220kcal | Carbohydrates: 29g | Protein: 40g | Fat: 103g | Saturated Fat: 41g | Cholesterol: 189mg | Sodium: 2037mg | Potassium: 1105mg | Fiber: 4g | Sugar: 17g | Vitamin A: 5305IU | Vitamin C: 25.5mg | Calcium: 85mg | Iron: 5.4mg
About our Recipes:Please note that our recipes have been developed using the US Customary measurement system and have not been tested for high altitude/elevation cooking and baking.
Have you made this recipe?Don't forget to leave a comment and rate the recipe below! Take a picture and tag @stripedspatula and #stripedspatula on Instagram for a chance to be featured in our Insta Stories and newsletter!