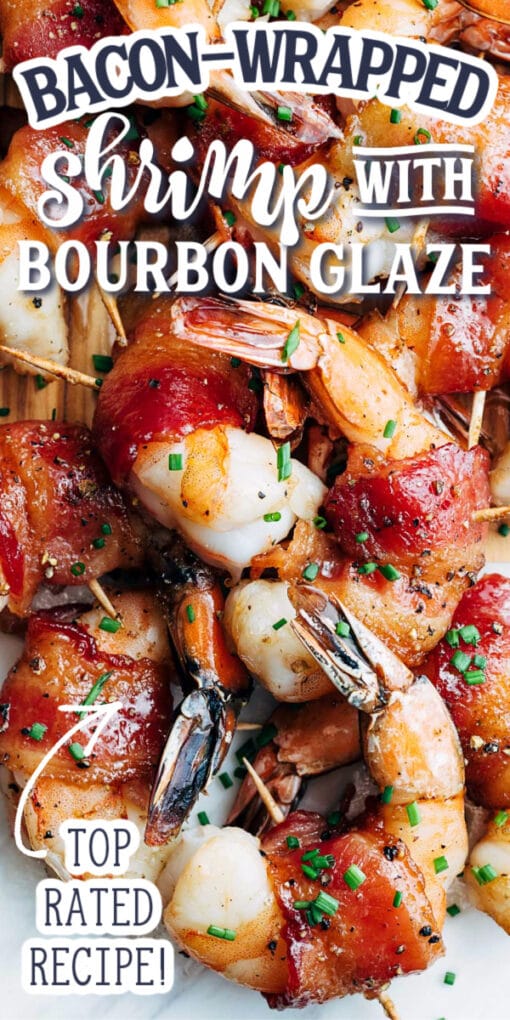 Crispy bacon meets juicy Extra-Jumbo shrimp and a caramelized brown sugar-bourbon glaze. These Bacon-Wrapped Shrimp are easy to make and will wow your guests every time! 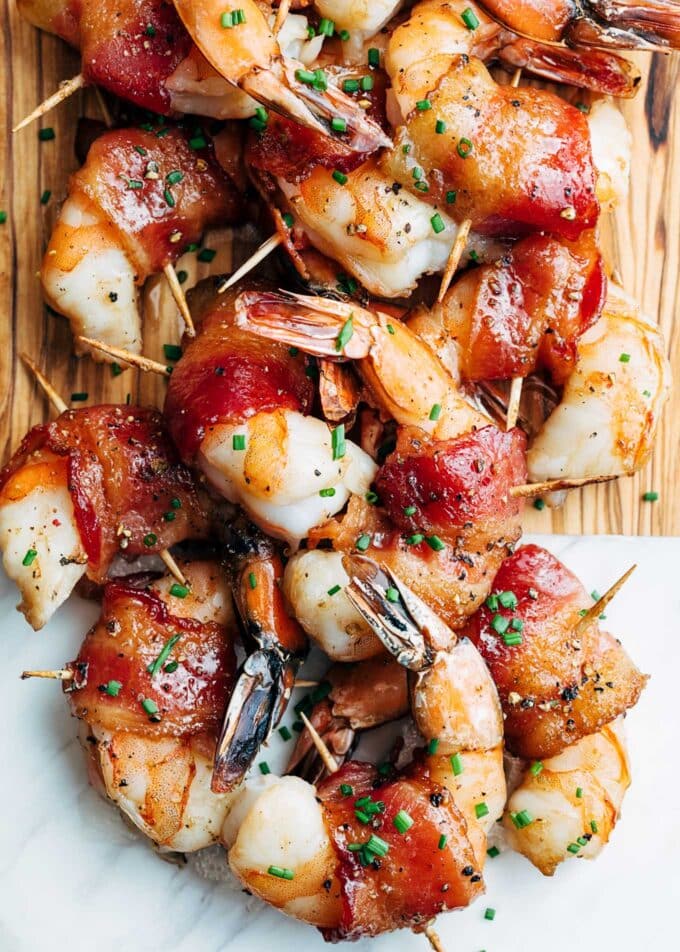 Shrimp might just be one of my Top 10 favorite foods. Especially plump shrimp, bought fresh from the seafood market, cooked to order to juicy perfection. I’ve been known to eat them right out of the steamer with nothing more than a squeeze of lemon during the summer. So good.

Bacon-Wrapped Shrimp have always been a hit with my family and friends. Tender shrimp, crispy bacon, what’s not to love? I like to add a touch of sweetness to my bacon-wrapped shrimp recipe with a brown sugar-bourbon glaze. A little cracked black pepper on top of the caramelized glaze makes these shrimp the perfect sweet-salty-lightly-spicy combo.

I first made a platter of these Bacon-Wrapped Shrimp for friends during the holidays and they were gone in about 15 minutes. That’s usually the not-so-secret code for recipe success! 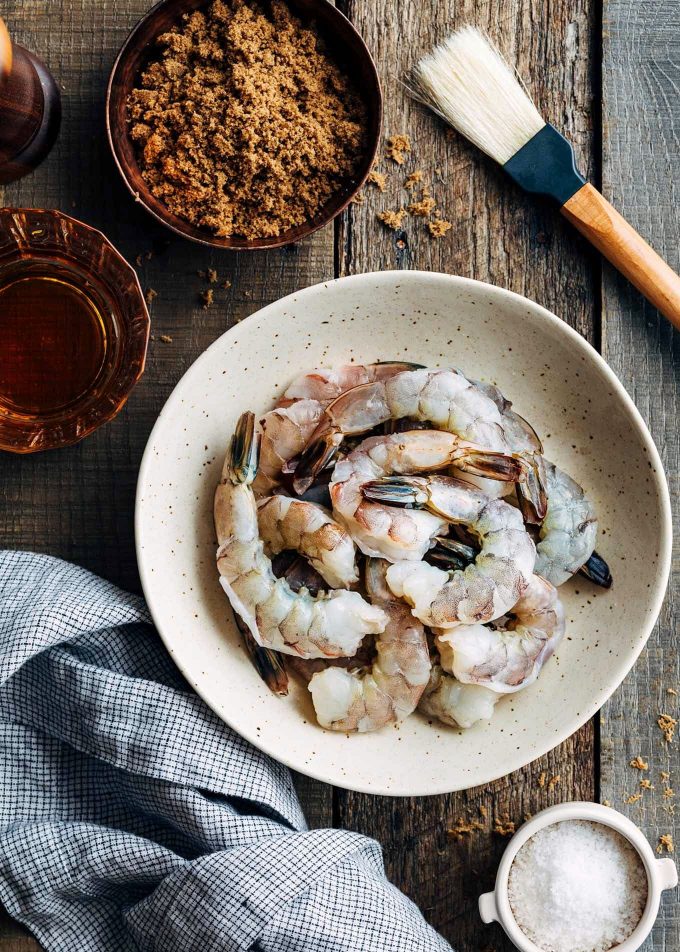 For bacon-wrapped shrimp, I like to use 16/20’s (often called, “Extra Jumbo”). The shrimp photographed in this post were at the larger end of this spectrum, weighing in at 16 shrimp per pound. 16/20’s are nice and meaty and make an impressive presentation on a platter.

To learn more about shrimp counts and what to look for at the market, check out my Shrimp Sizes reference guide.

Should I Buy Shrimp with the Shells On?

For Bacon-Wrapped Shrimp, you’ll need cleaned and peeled raw shrimp with the tails on. I like to buy raw shell-on shrimp and clean and peel them at home. If you live near a fishmonger, you can ask him or her to devein the shrimp (removing the dark “vein” from the back of the shrimp, which is actually the digestive track) and peel the shells for you.

It’s easy to peel and devein shrimp at home! Just use a paring knife or kitchen shears to make a shallow cut along the back of the shrimp, in the middle, from the tip to where the tails begin. Then just lift out the vein and peel away the shells, leaving the tail on.

When shopping for shrimp, I like to make sure I’m buying those that are sustainable and ethically-sourced, with no chemical additives. My friend Sarah talks about these issues in depth on her blog, Champagne Tastes. Read more in her Ultimate Guide to Cooking Shrimp.

How to Make Bacon-Wrapped Shrimp

The trick to making really good bacon-wrapped shrimp is making sure that the shrimp don’t get overcooked in the time it takes the bacon to crisp. Raw shrimp only need a few minutes in a hot oven to turn opaque and tender, especially when the shells have been removed. When they’re cooked too long, shrimp can become tough, dry, and a bit rubbery.

The solution? Par-cook the bacon before wrapping the shrimp. That way, the bacon gets a head start in the cooking process. It can crisp up perfectly in the amount of time the raw shrimp need to cook through.

To secure the par-cooked bacon to the shrimp, all you need is a toothpick that has been soaked in water for 30 minutes or so before assembly. Soaking the toothpicks helps them not to char in the hot oven. 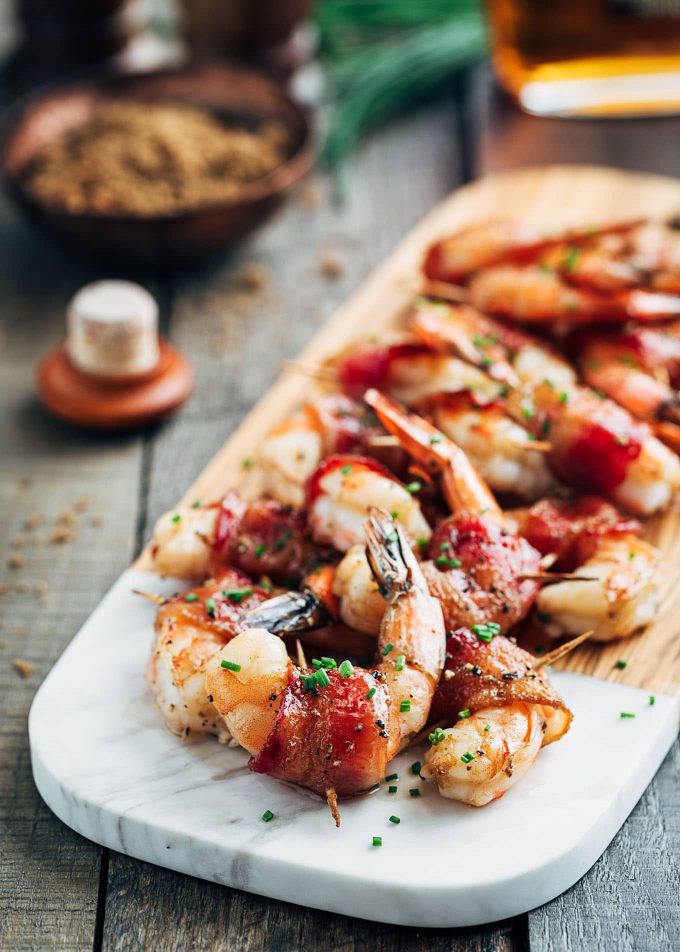 One of my favorite ways to dress up bacon is with a brown sugar bourbon glaze. As the sugar in the glaze caramelizes in the oven, it creates a delicious glossy lacquer on the bacon.

It couldn’t be easier to make; the glaze is just dark brown sugar and bourbon stirred together. I often brush it onto slices of baked thick-cut bacon for a weekend breakfast or brunch.

When glazing bacon-wrapped shrimp, I like to apply it in two stages after the bacon has been par-cooked. I lightly-brush each wrapped shrimp with a little bit of the glaze and bake them for 5 minutes. Then, I give the shrimp a second coat of glaze and finish the baking process for another 5-8 minutes.

Served hot with a sprinkle of freshly-snipped chives, Bacon Wrapped Shrimp with Bourbon Glaze are perfect for Game Day parties, holiday entertaining, or anytime a craving for shrimp hits! 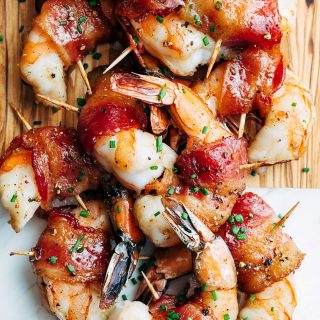 Calories: 95kcal | Carbohydrates: 4g | Protein: 7g | Fat: 4g | Saturated Fat: 1g | Cholesterol: 78mg | Sodium: 294mg | Potassium: 50mg | Sugar: 4g | Vitamin A: 5IU | Vitamin C: 1.2mg | Calcium: 45mg | Iron: 0.7mg
About our Recipes:Please note that our recipes have been developed using the US Customary measurement system and have not been tested for high altitude/elevation cooking and baking.
Have you made this recipe?Don't forget to leave a comment and rate the recipe below! Take a picture and tag @stripedspatula and #stripedspatula on Instagram for a chance to be featured in our Insta Stories and newsletter!