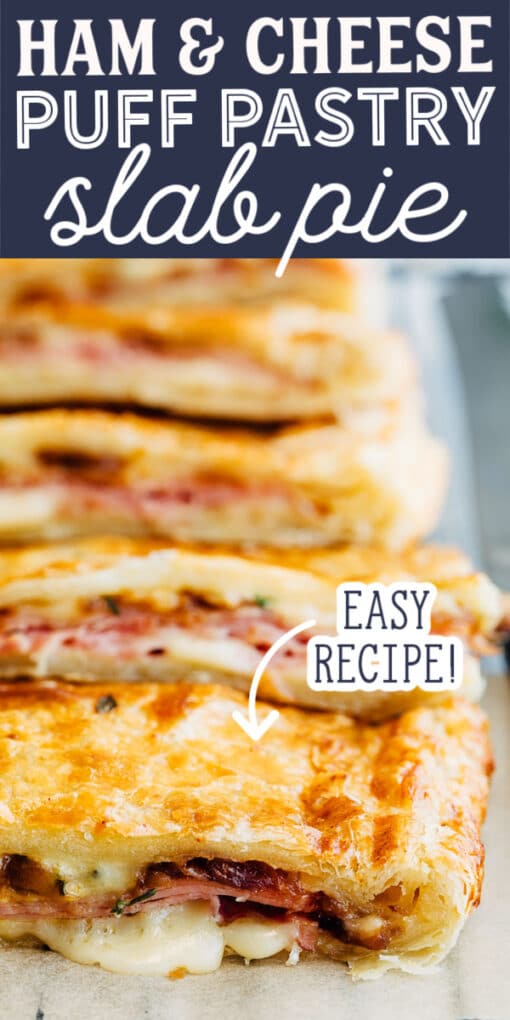 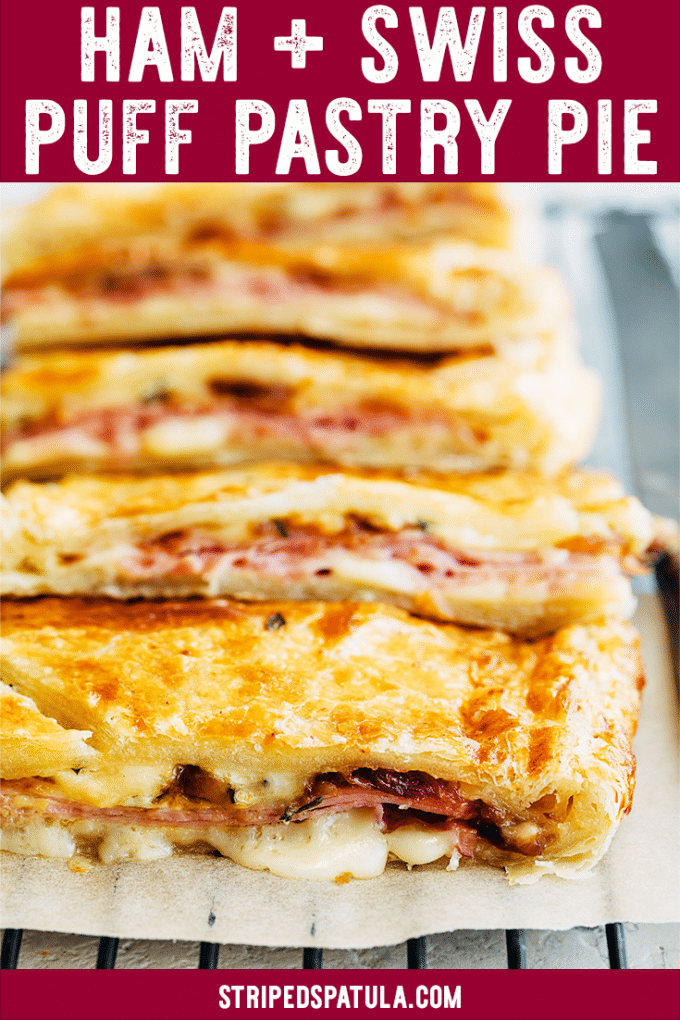 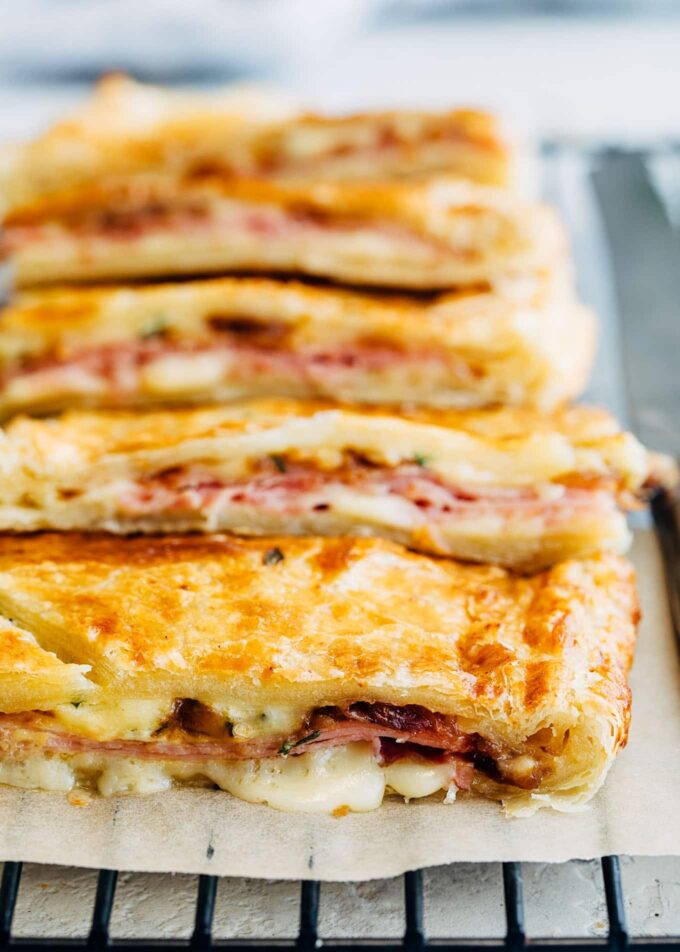 I’ve been having a lot of fun looking through some of my mother’s old recipe books from the 70’s and early-80’s. Some of the recipes have made both of us chuckle a bit, but many have given me inspiration for some reinvented dishes.

This delicious Ham and Cheese Puff Pastry Slab Pie evolved from a recipe my mother clipped around 1980. 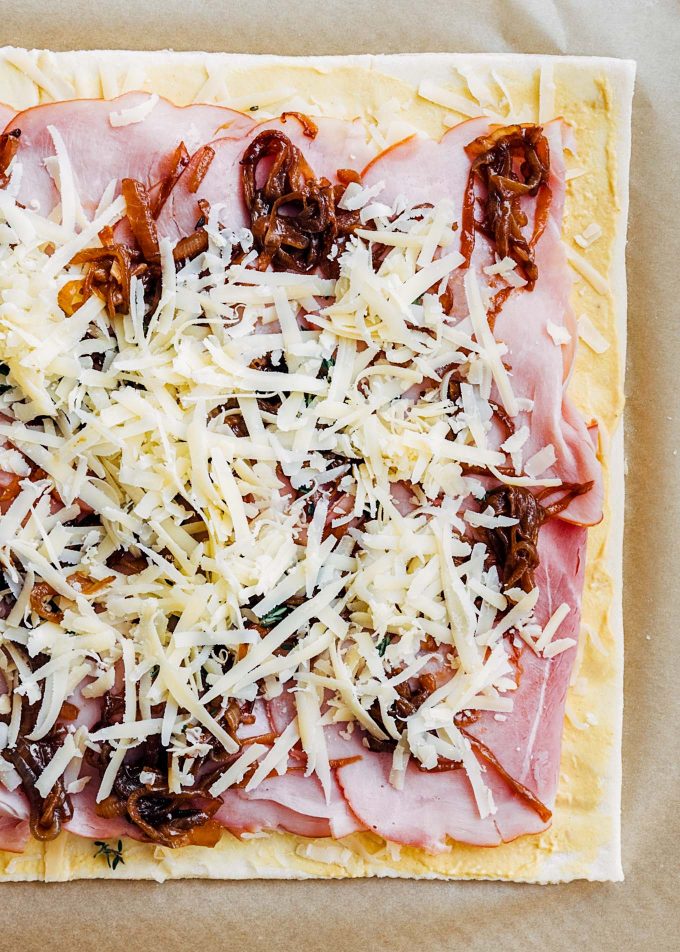 The Retro Version of Ham and Cheese Puff Pastry

The recipe that this slab pie originated from was called “Greek Pizza,” though neither my mother nor I quite understands the name, because there’s really nothing “Greek” about it. (It’s much closer to a French ham and cheese pastry called, “Feuilleté Au Jambon”.)

The original “Greek Pizza” was a very rich bite (an understatement), calling for both a full pound of ham and a pound of cheese layered between two squares of mustard-brushed puff pastry. (Yikes!) The concept was good, but when it baked up, it was salty and soggy, and the overall feel was so heavy, I could barely manage more than a bite or two.

“This needs less cheese” aren’t words I speak often, but there was truly way too much of everything in the original pie. 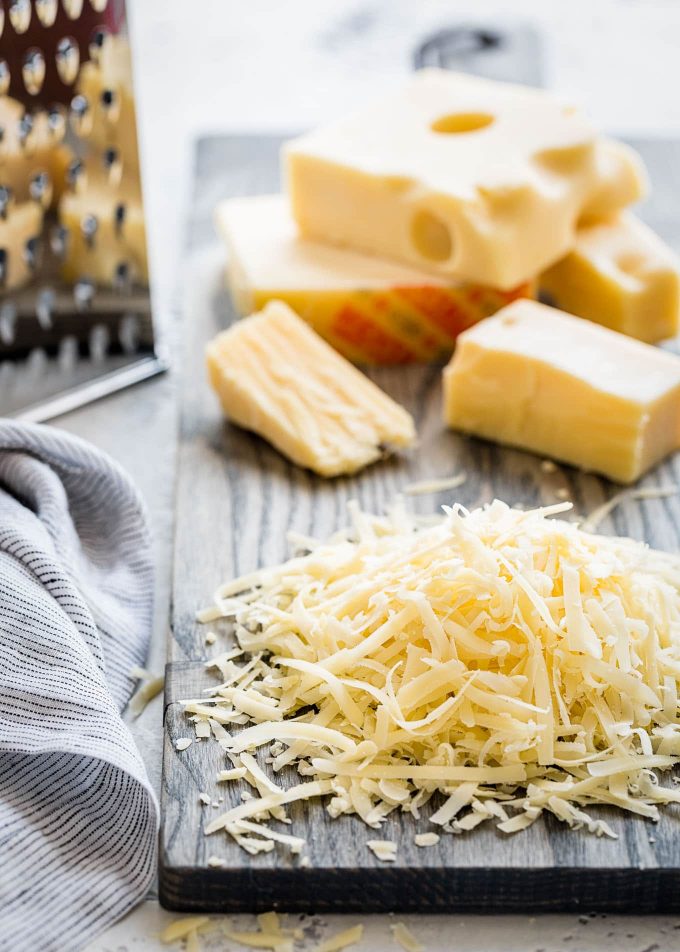 When my mother and I decided to start tweaking the recipe, the first thing I did was dial back the ham and cheese quantities significantly, which lightened the texture. My mother had the great suggestion of adding caramelized onions and herbs for a touch of sweetness and freshness. (Thanks, Mom!)

In terms of cheese, I really wanted a Swiss variety that wouldn’t be too strong, throw too much oil, or become overly gooey and messy when it melted. (To avoid sogginess in a puff pastry dish like this, balance is key.) 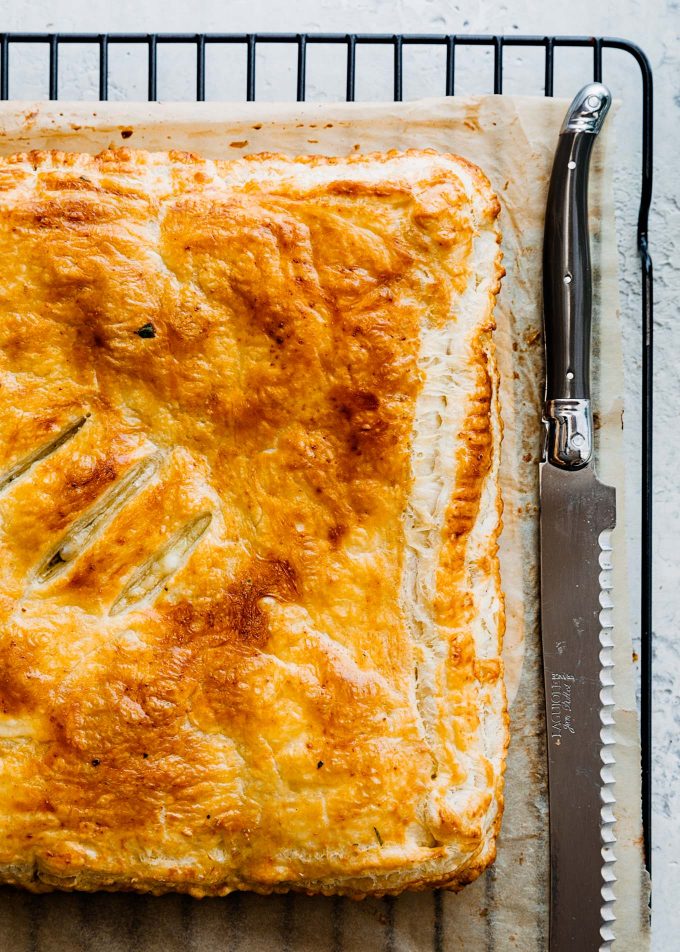 I’ve made this with both Gruyère and Emmental. The former brings a more assertive, slightly saltier flavor to the baked pastry. While I love Grueyère, I found it richness to be a bit too heavy when baked with the other components of this recipe. Emmental is milder with a meltier texture, and is my favorite for this ham and cheese puff pastry.

Ever wonder about the holes in Swiss cheese? Check out, How Does Swiss Cheese Get its Holes? From The New Yorker.

If there’s one step I wouldn’t skip in the recipe, it’s cutting the slits in the top of the pie before baking. The steam needs to escape for all of those flaky layers in the pastry to puff properly. 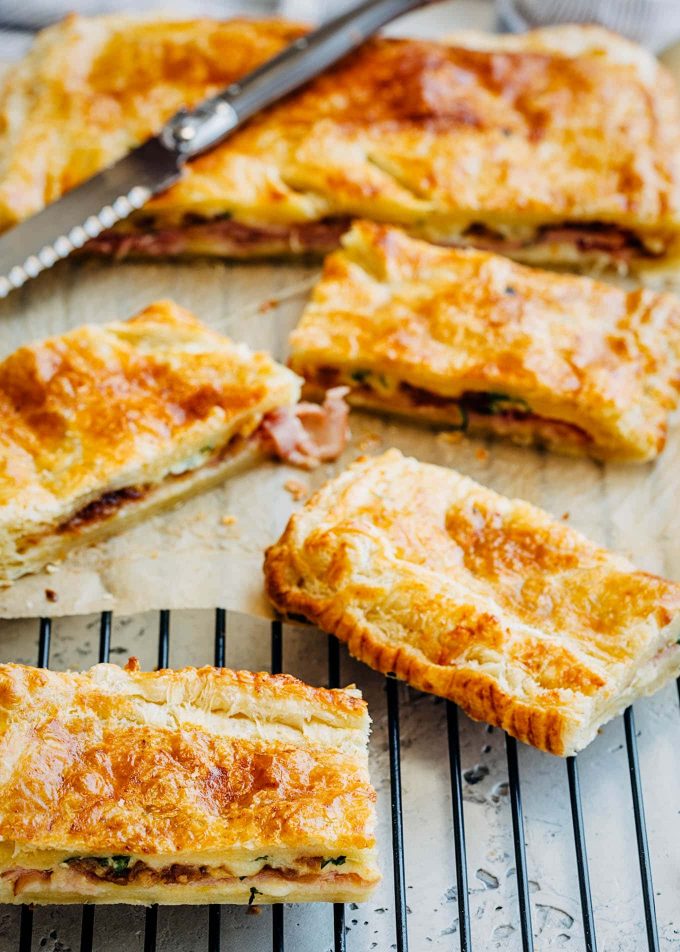 We most enjoy this slab pie after it’s allowed to cool for about 10 minutes, so that the butter in the puff pastry has a chance to settle and the flavors can meld a bit. With the fillings, I find that it can be a little too messy to slice and serve cleanly right out of the oven.

The pastry can be cut and served as either strips or squares, depending on the occasion and your guests. If you’re serving it as an appetizer with other dishes, small squares are great. For a casual lunch or brunch, I tend to cut larger strips or rectangles and serve them with lightly-dressed spring greens.

That said, I do like to serve this puff pastry slab pie while it’s still warm. I don’t find that it reheats well (it’s hard to regain the same flakiness in the puff pastry with the fillings), so it’s not a recipe that I bake in advance.

Since we were able to bring this oldie but goodie into 2018, I might be feeling inspired to throw on a pair of scrunch socks with my leggings and really party like it’s 1980. I promise to spare you the pics! 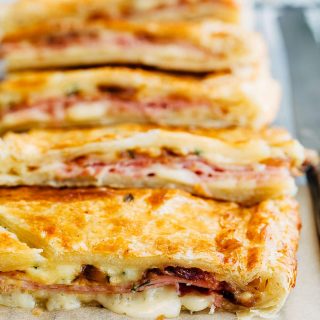 Calories: 241kcal | Carbohydrates: 14g | Protein: 7g | Fat: 16g | Saturated Fat: 5g | Cholesterol: 26mg | Sodium: 238mg | Potassium: 66mg | Vitamin A: 130IU | Vitamin C: 0.8mg | Calcium: 91mg | Iron: 1mg
About our Recipes:Please note that our recipes have been developed using the US Customary measurement system and have not been tested for high altitude/elevation cooking and baking.
Have you made this recipe?Don't forget to leave a comment and rate the recipe below! Take a picture and tag @stripedspatula and #stripedspatula on Instagram for a chance to be featured in our Insta Stories and newsletter!

Originally Published February 2, 2016. Updated with new photos and video in 2018.