Get a taste of New Orleans with a classic muffuletta sandwich! Layered with Genoa Salami, Mortadella (Italian bologna), Capicola (ham), Provolone, Mozzarella, and a homemade olive salad, this indulgent sandwich is worthy of a celebration. 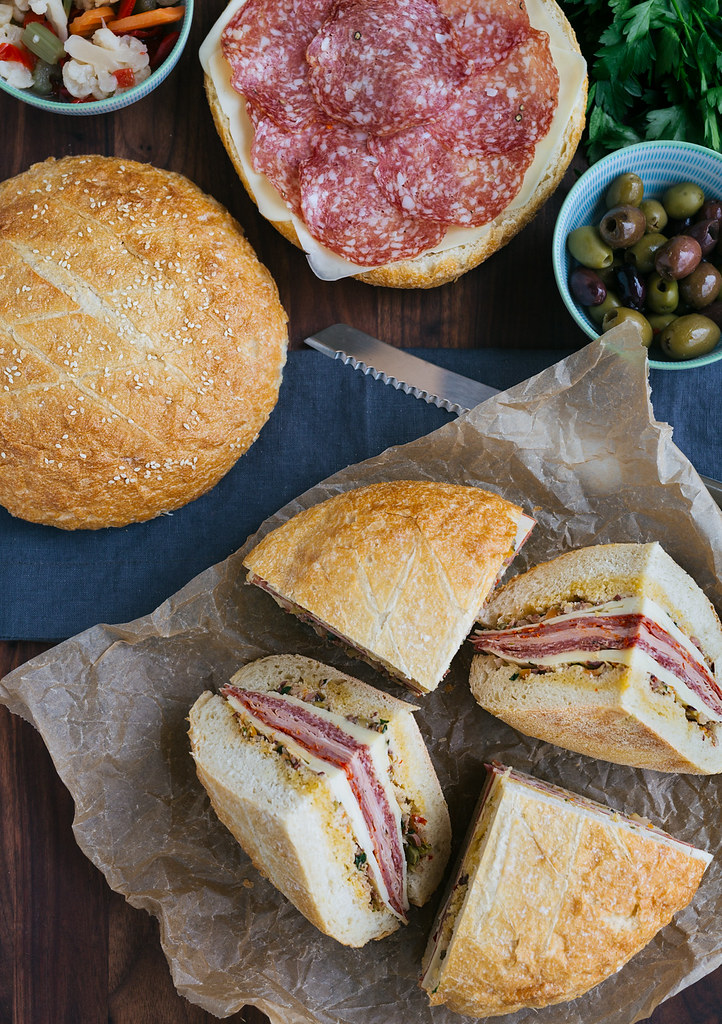 Who’s ready to feast for Mardi Gras? They don’t call it “Fat Tuesday” for nothing, so get your finest stretchy pants ready and be prepared to indulge!

Pre-Lenten festivities are held across the globe. Here in the States, New Orleans is the epicenter of the Mardi Gras tradition. There are so many fantastic dishes associated with Mardi Gras, from King Cakes and Jambalaya, to Dirty Rice and Pimm’s Cups.

One of my favorites has always been the Muffuletta. At its roots, muffuletta is some of the best components of an Italian antipasto platter wrapped up into a sandwich of epic proportions. Its impressive layers of thinly-sliced meats and cheeses, paired with an olive salad spread, pack a huge flavor punch. 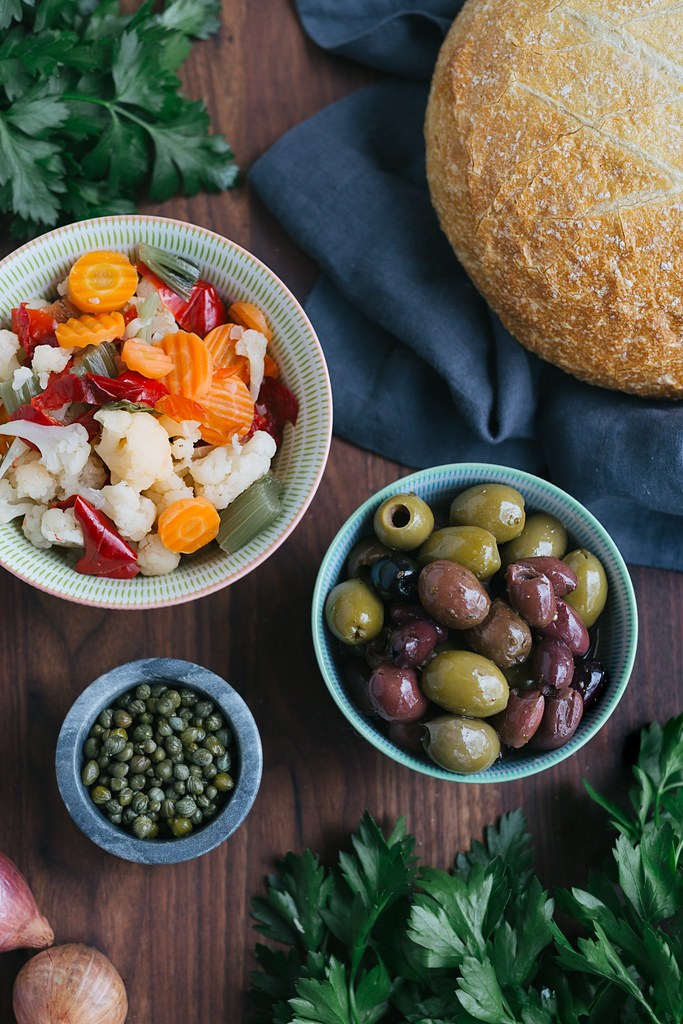 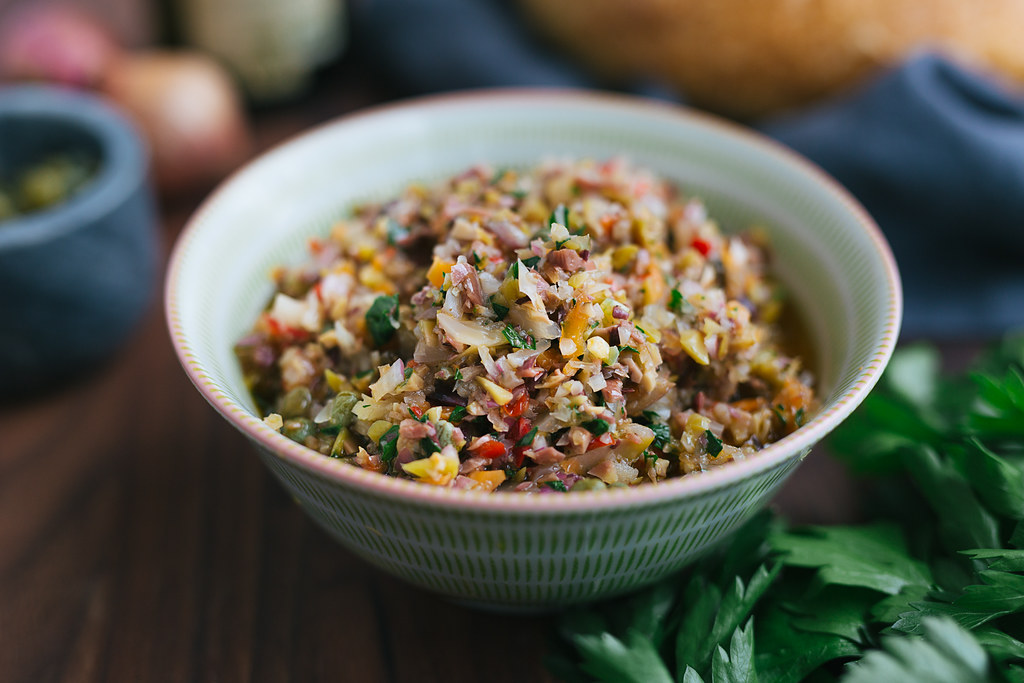 The origins of the Muffuletta sandwich trace to Sicilian immigration to New Orleans at the turn of the 20th century, and the iconic Central Grocery.

Traditionally, muffuletta is served on a soft sesame-seeded Italian round that is not overly thick. This exact style of bread can be difficult to find outside of New Orleans.

As you can see from the photos, I substituted an 8-inch round boule from my local bakery. Focaccia rounds and ciabatta also work well for this sandwich. You don’t want a bread with a thick, heavy crust; it will be too difficult to eat.

If the interior of your round, like mine, is on the “breadier” side, it’s best to hollow it out a bit to have the best filling-to-bread ratio. 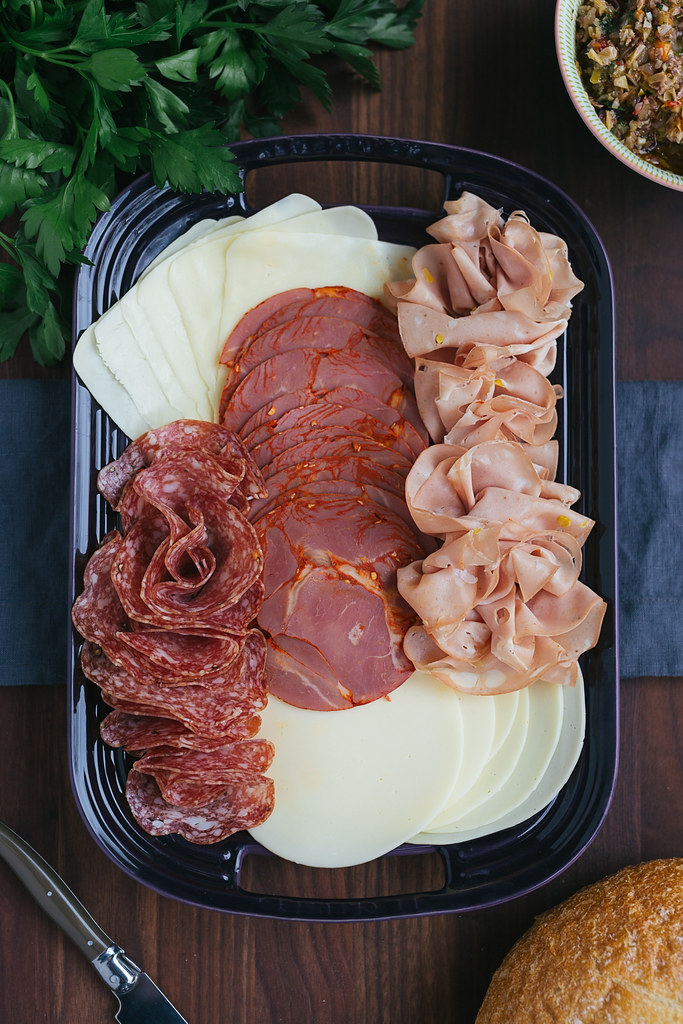 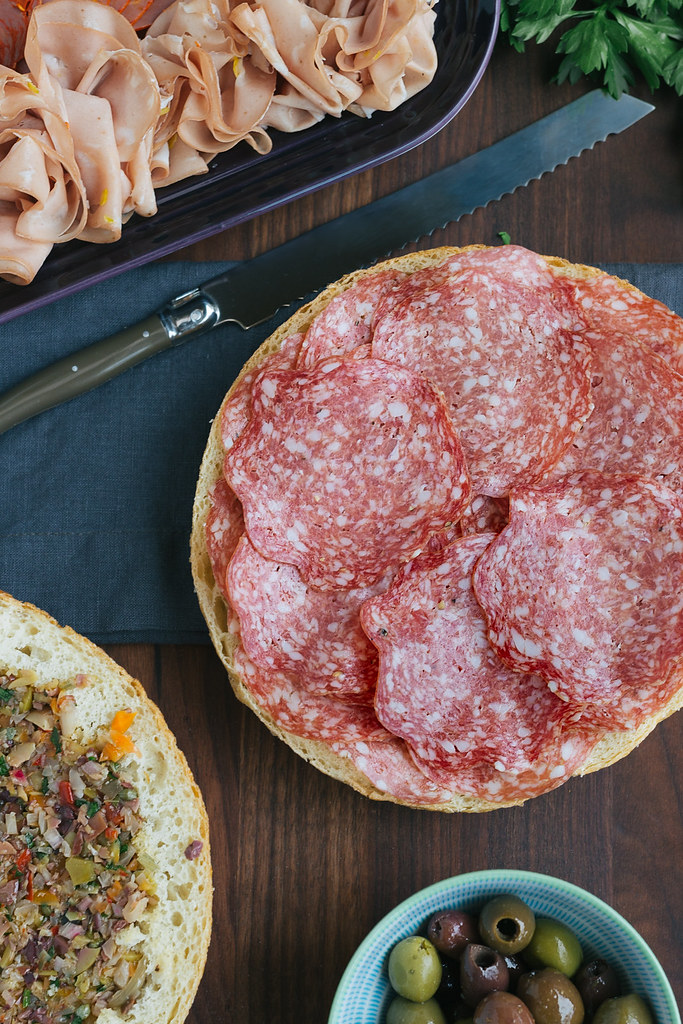 The most recognizable component of the muffuletta sandwich, aside from the bread, is the olive salad. If you have the time to make the salad the day before and let it marinate overnight, your flavor reward will be huge.

I make my salad with a mix of antipasto olives, a traditional pickled vegetable relish called Giardiniera, shallots, capers, and herbs.

Giardiniera typically contains cauliflower, carrots, celery, and peppers. It’s salty, tangy, and just a little bit spicy (though, markedly “hot” varieties can be purchased as well). You can find it in the International aisle of many groceries, the self-serve antipasto bar, or at specialty Italian markets. Giardiniera can also be made at home, something I haven’t gotten a chance to do yet, but is on my “must try” list for soon. 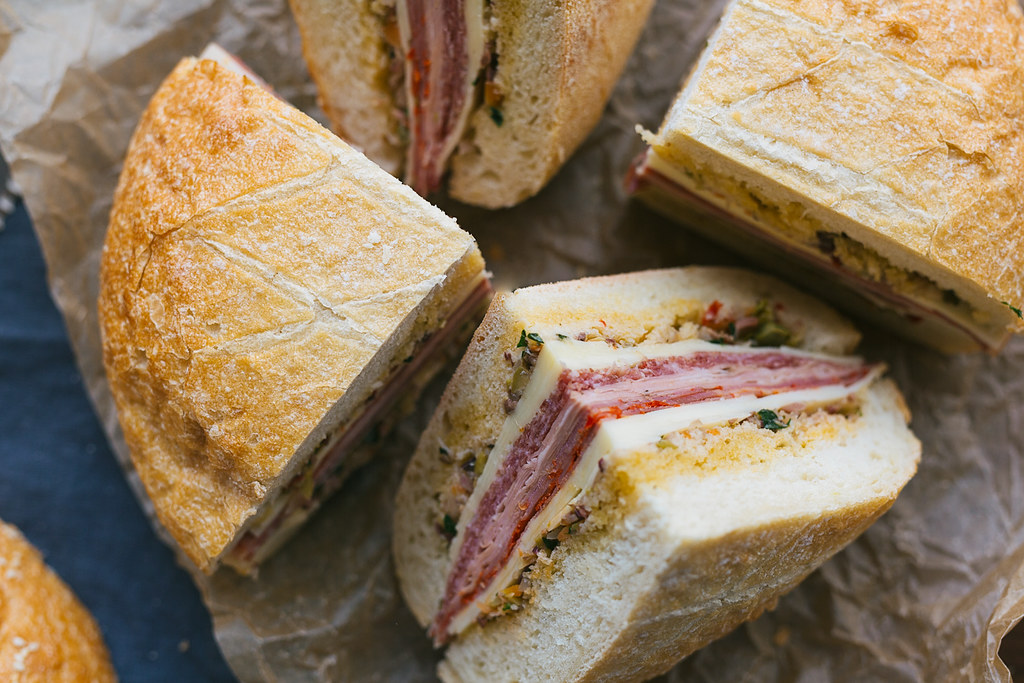 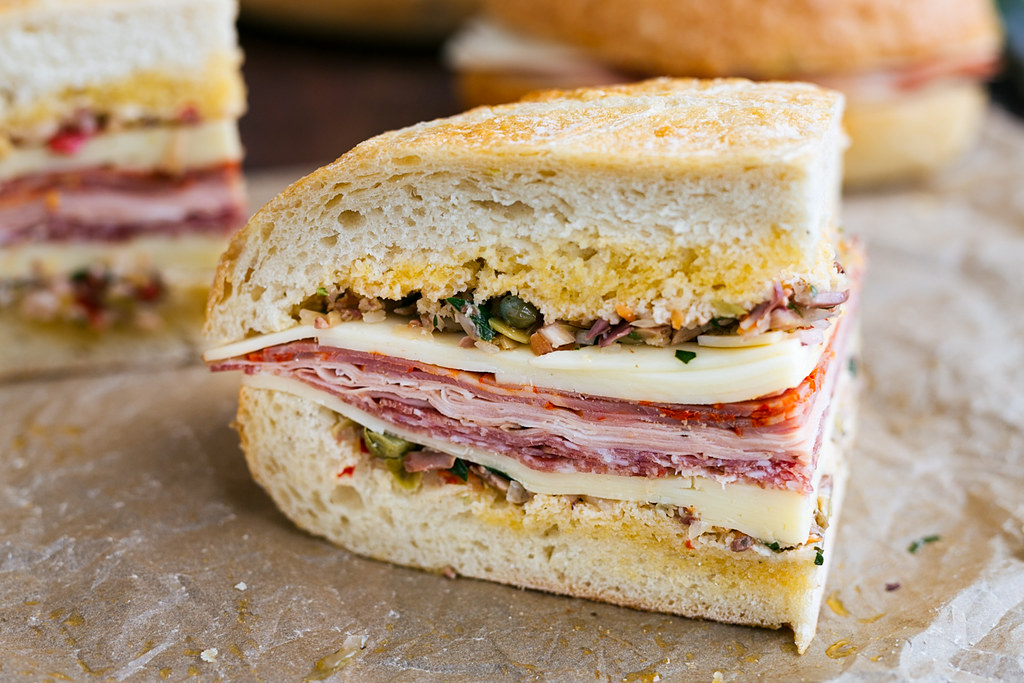 One last thing: for the perfect muffuletta, patience is key.

Weighting down the assembled sandwich (I use a grill press or a cast iron skillet) for an hour’s rest gives the oil and vinegar in the olive salad a chance to absorb into the bread. (Hello, deliciousness!)

It also helps compress the layers for slicing beautiful wedges. So, hands off for an hour! It’s a cruel request, and I know you will be hangry with me. I mean, I was hangry with me while cooking for this post. A few bites of the well-rested sandwich and I’m pretty sure I heard my tastebuds singing choruses of muffuletta glory.

So, go! Get your Mardi Gras on with a taste of New Orleans!

Building your Mardi Gras menu? Check out these recipes that caught my eye around the Web. 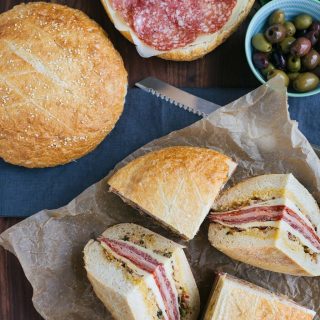 Traditional muffuletta bread can be difficult to source outside of Louisiana. As an alternative, look for a boule, round focaccia, or ciabatta that isn’t overly crusty. Sesame seeds are traditional. We like our muffulettas made with 1/4 pound of each of the meats and cheeses, but if you prefer a more substantial sandwich, increase to 1/3 pound each.

Calories: 938kcal | Carbohydrates: 47g | Protein: 37g | Fat: 85g | Saturated Fat: 21g | Cholesterol: 105mg | Sodium: 4023mg | Potassium: 269mg | Fiber: 1g | Sugar: 1g | Vitamin A: 890IU | Vitamin C: 11.2mg | Calcium: 393mg | Iron: 2.1mg
About our Recipes:Please note that our recipes have been developed using the US Customary measurement system and have not been tested for high altitude/elevation cooking and baking.
Have you made this recipe?Don't forget to leave a comment and rate the recipe below! Take a picture and tag @stripedspatula and #stripedspatula on Instagram for a chance to be featured in our Insta Stories and newsletter!