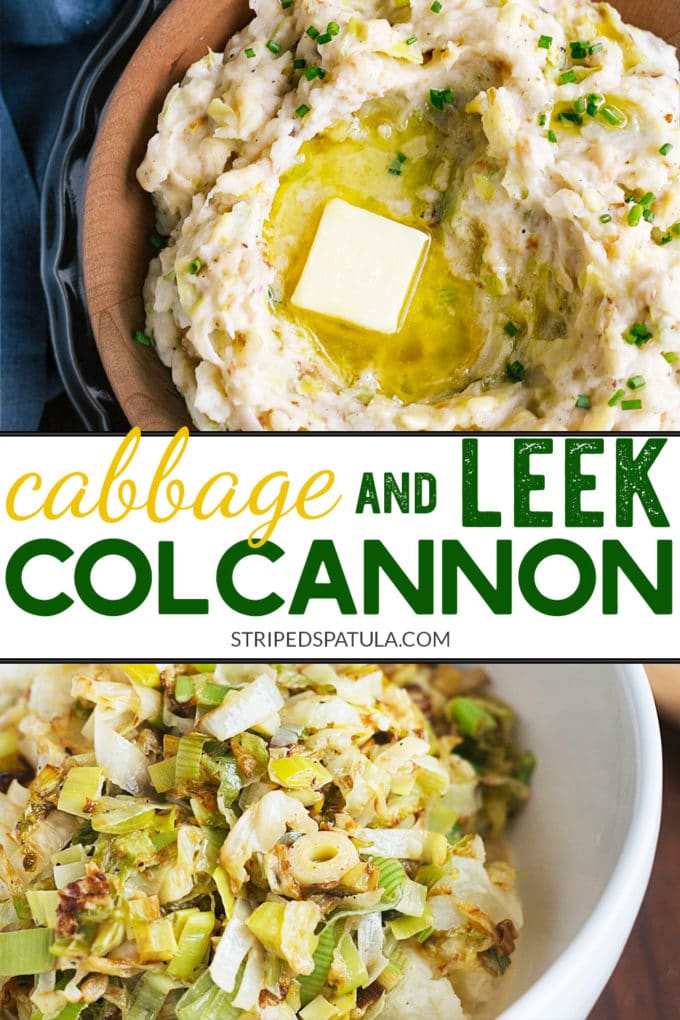 My Colcannon recipe combines rich and creamy mashed potatoes with Savoy cabbage, sweet leeks, and a touch of garlic. Drizzle the top with melted Irish butter for an indulgent addition to your St. Patrick’s Day feast! 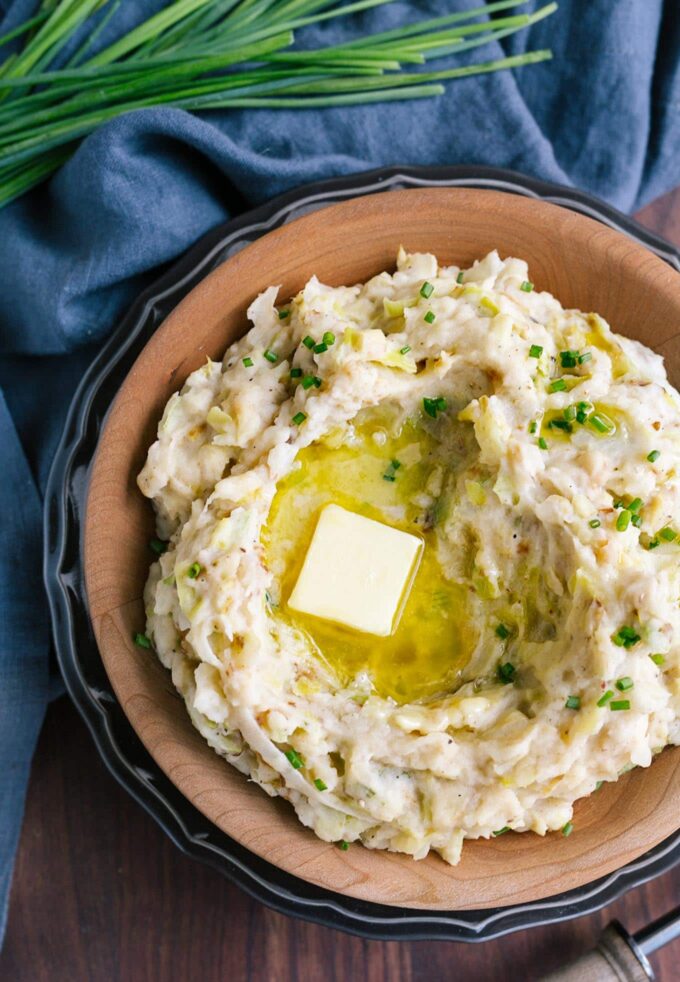 This time a few years ago, I’d never tasted colcannon. I had heard about the classic Irish potato dish so many times, and somehow, St. Patrick’s Day came and went every year without any colcannon on my table.

When I finally got around to making it, each buttery spoonful on my plate carried the weight of mixed emotions. (That sounds dramatic, but it’s true.) On one hand, the potatoes were incredible: rustic, hearty, and somehow still fluffy. They were unlike any potato dish I’d eaten.

At the same time, as someone who’s weak in the face of good mashed potatoes, I was thoroughly annoyed with myself for not having made them sooner. To think of all of the St. Patrick’s Day dinners I could’ve zhooshed up with a bowl of colcannon!

I’ve made colcannon several times since, testing a couple of different flavor variations. This recipe, with sautéed Savoy cabbage and leeks, has become our favorite. It’s amazing alongside my Beer Braised Corned Beef or Instant Pot Corned Beef, lamb, or even roasted chicken.

Bottom line: whether or not it’s St. Patrick’s Day, if it’s a dinner that deserves a comforting, grab-a-spoon-and-dig-in potato side, colcannon is a recipe to consider! 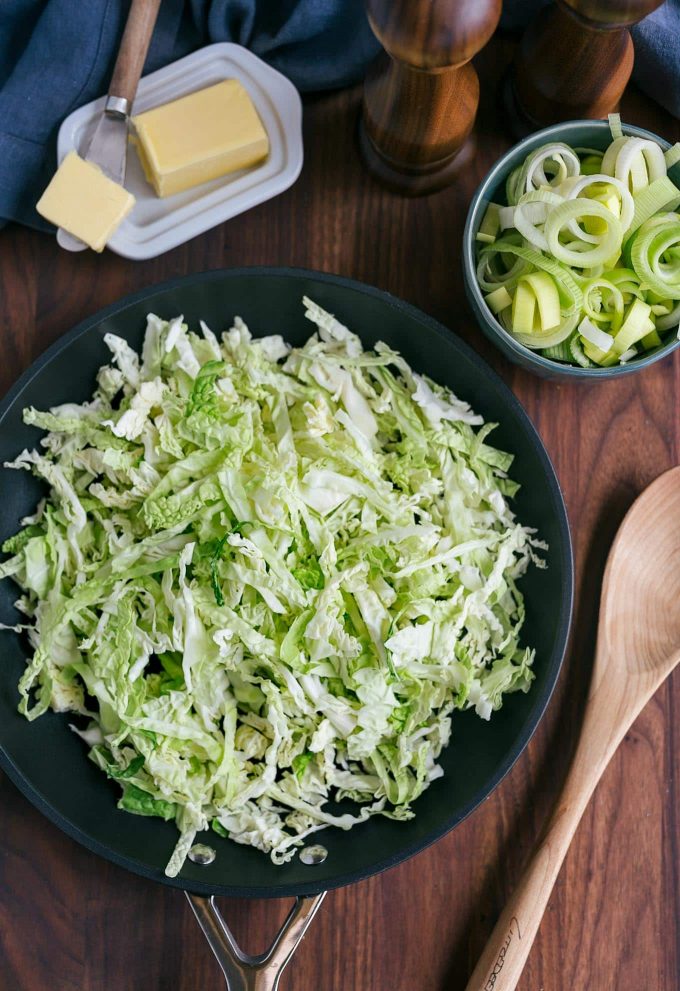 Exactly What is Colcannon?

Colcannon is Irish for “white-speckled cabbage.” Recipes vary by region and cook, but most combine the potatoes with kale, and/or cabbage.

As I’ve shared many times before, I’m something of a leek fiend, so exploring a leek colcannon version was high on my list. In the end, the combination of sweet leeks with the tender cabbage and ultra-creamy potatoes won my heart.

Many traditional colcannon recipes call for boiling the vegetables with the potatoes until tender, while variations utilize a sautéing or pan-roasting method. After having tried both, I prefer to sauté the vegetables. The caramelization that both the cabbage and leeks develop bring a great depth of flavor to the otherwise blank canvas of the mashed potatoes. 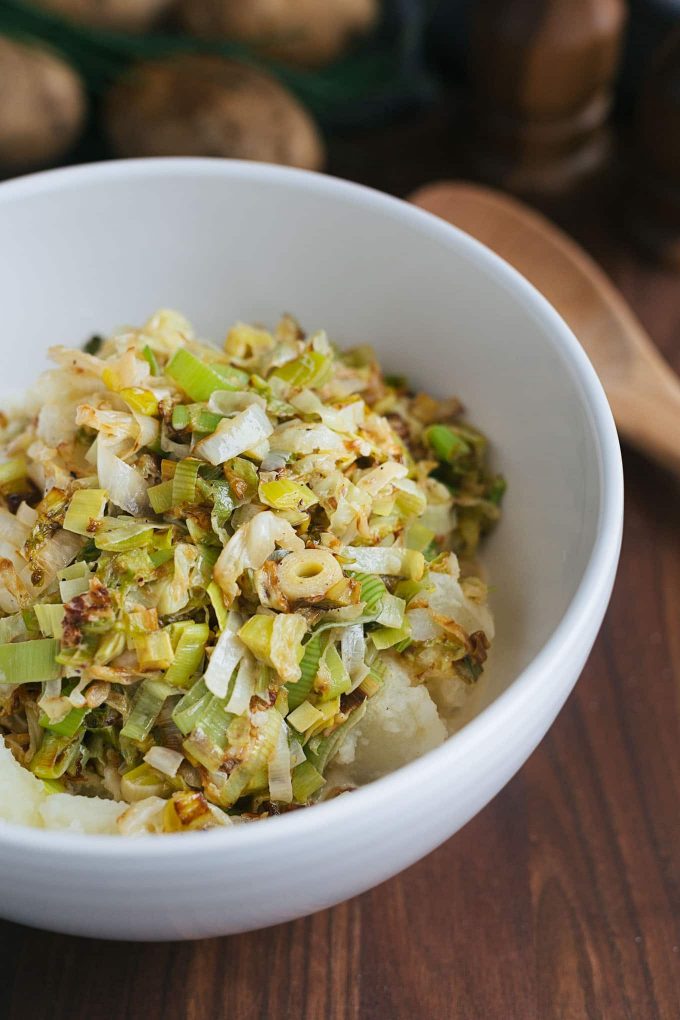 What Kind of Potatoes Are Best For Colcannon?

Traditionally, colcannon is made with either russet or red-skinned potatoes. I like using russet for their higher starch content and lower moisture. In this particular recipe, I find that they produce the fluffiest base for the caramelized vegetables.

Want to read more about choosing the best potato variety for your recipes? Check out How to Pick a Potato from Kitchn.

For the best texture, make sure your boiled potatoes are drained well before combining them with the rest of the ingredients. I like to return the potatoes to the hot cooking pot after draining, to give them a few minutes to rest and evaporate any residual moisture.

As you mash the potatoes with the half and half, the texture might look too thin at first. It takes a couple of minutes for the liquid to soak in and create that swoon-worthy, creamy consistency.

If you do prefer a thicker, sturdier potato base for your colcannon, you can reduce the half and half to 3/4 cup and adjust to taste as they stand. The colcannon photographed in this post was made with well-drained potatoes and a full cup of half and half. 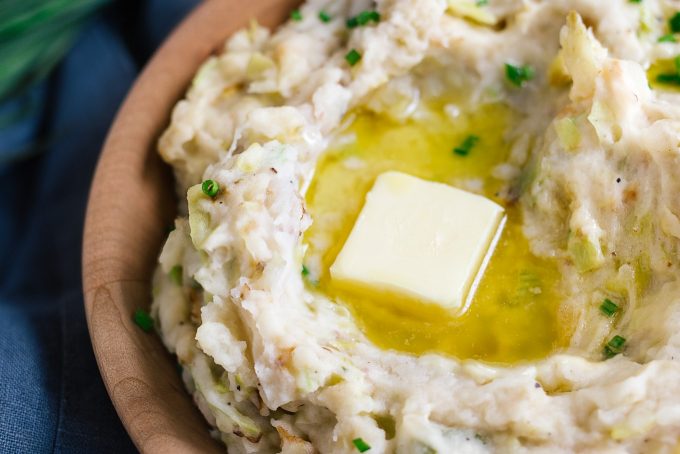 If there’s one element of colcannon that’s consistent across recipes (aside from potatoes, of course), it’s butter, and plenty of it.

I incorporate butter both into the potatoes themselves with the sautéed vegetables, and drizzle it over the dish before serving. As each scoop of colcannon is served, the spoon dips through a well of pooled butter in the center of the bowl.

If you’re able to source it, use Irish butter for an extra boost of flavor, as I did here. It’s a bit softer than other butters on the market with an ultra-fresh, creamy taste, and a beautiful golden color. Many grocery stores are now stocking it regularly in their dairy sections.

Are you hungry yet? Grab a spoon. These gorgeous potatoes are waiting for you. 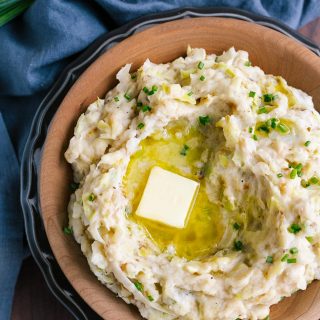 *Keep in mind that the potatoes may look loose when the half and half is first added, but will naturally thicken as you mash the mixture, and within about 5 minutes of standing. If you prefer your mashed potatoes stiffer, reduce liquid to 3/4 cup. I love using Irish butter in these rich potatoes. I generally use unsalted in the potatoes themselves so I can better control the saltiness of the dish. I’ll often use salted butter in the melted drizzle on top for an extra-luscious finish.

Calories: 449kcal | Carbohydrates: 53g | Protein: 8g | Fat: 24g | Saturated Fat: 15g | Cholesterol: 67mg | Sodium: 56mg | Potassium: 1193mg | Fiber: 5g | Sugar: 4g | Vitamin A: 1530IU | Vitamin C: 38mg | Calcium: 145mg | Iron: 3.1mg
About our Recipes:Please note that our recipes have been developed using the US Customary measurement system and have not been tested for high altitude/elevation cooking and baking.
Have you made this recipe?Don't forget to leave a comment and rate the recipe below! Take a picture and tag @stripedspatula and #stripedspatula on Instagram for a chance to be featured in our Insta Stories and newsletter!