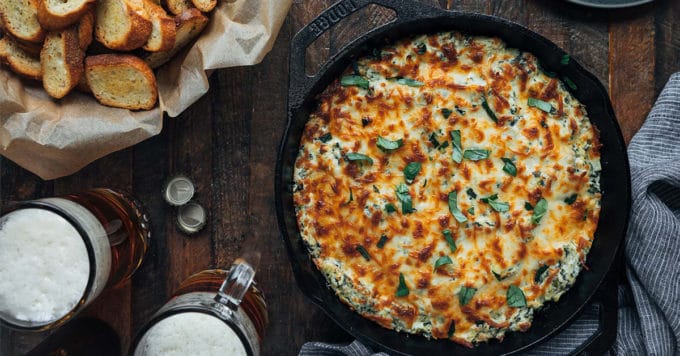 This decadent Spinach Artichoke Dip is loaded with six cheeses and baked to bubbly perfection. It’s my most requested party recipe, and always leaves my guests scraping the pan for more!

Visiting from Pinterest? This recipe was originally published in 2014 and updated in 2018 with new photos. New look, same great dip!

A few years back, an insurance company put out a TV commercial where a guy karaoke’d his online dating profile to the tune of “Total Eclipse of the Heart”. (Remember it? Hilarious.) Among his top accolades was the fact that everyone loved his spinach dip. As soon as it hit the airwaves, it became a running joke amongst my friends.

“You two are soulmates!” they’d tease.

You see, the recipe that my friends and family have asked me to share most often over the years is my Spinach and Artichoke Dip. I first started making it back in my early 20’s, and it’s become something of a calling card.

Despite the fact that this dip always seems to disappear immediately upon serving, I once made the assumption that people were growing tired of it. I mean, after about the fifth or sixth batch in half as many months, I was sick of Spinach Artichoke Dip.

So, one day, I invited friends over and ditched the dip for other snacks. They happily ate and enjoyed whatever I made that day, but not without a table full of incredulous faces asking me, “Where’s the dip?” Lesson learned.

Let’s talk for a moment about the greater world of Spinach and Artichoke Dip. As I see it, there are two camps in the baked variety divide: those who prefer their dip thick and hearty, and those who like a thinner, more Alfredo-esque consistency.

I’m not totally opposed to thinner spinach dip recipes; they can be quite good! But, a few lackluster restaurant experiences with it have left me jaded. (What I ordered in one place can only be described as islands of artichoke afloat in an oily sea of sauce. Nightmares still occur.)

This dip recipe falls in the first category. Brimming with six cheeses, garlic, artichoke hearts, and chopped spinach, this is the kind of dip you’ll want to dig into with a sturdy dipping vehicle and a spoon. It packs a punch of flavor from the first bite to the last.

My preferred Italian cheese blend for this recipe is BelGioioso’s. (Not an ad! Just a happy consumer.) Their 4-cheese shred is a mix of Asiago, Provolone, Parmesan, and Fontina. I buy it at my gourmet cheese counter.

The product has a pretty wide distribution, and I’ve found it in multiple states over the years. If you’re unable to source it in your area, you can make your own blend by combining equal parts of the cheeses listed.

As if that weren’t enough cheese (is there ever enough cheese?), I top the whole thing with shredded mozzarella. My friends and I like when I broil the top of the dip and the mozzarella gets crisp and browned.

Diving into the warm, crisped mozzarella with a piece of bread, revealing the creamy, cheesy dip below is nothing short of spinach dip nirvana!

Can I Make This Dip Ahead?

Yes! This dip is perfect for easy entertaining. You can assemble it up to a day in advance and store it, covered in the refrigerator, until ready to bake.

Since you’re chilling the dip, you’ll need to add 5-10 minutes to the total baking time. If the cheese on top is browning too quickly before the center is hot, cover it with a piece of foil.

I have frozen this dip in foil baking pans in the past, and the texture wasn’t quite the same as freshly-baked dip. The oils in the cheese separated out on both tests.

While the dip was fine to eat after stirring, I really recommend making the recipe either fresh, or prepping it the day before and refrigerating, as described above.

For the best experience, serve this dip hot, while the mozzarella on top is still nice and “melty.”

Dipping “vehicles” are totally up to you.  Bread cubes, assorted neutral crackers, tortilla chips, crostini, or crudités all work well. I most often serve this dip with lightly-seasoned crostini that I’ve made from a baguette. It has plenty of garlic, so I don’t find that it needs garlic crostini or flavored crackers.

This is the perfect dip for serving with your cold beverage of choice, whether that’s beer for Game Day, a tall glass of iced tea, or your favorite wine for the holidays.

Any way you serve it, I hope your guests love it as much as mine do. Like the commercial, you might even wind up having to add it to your next karaoke night résumé. Don’t say I didn’t warn you!

Craving more? We’d love to welcome you to our exclusive Facebook group community where we share recipes, hosting tips, party ideas, and more! 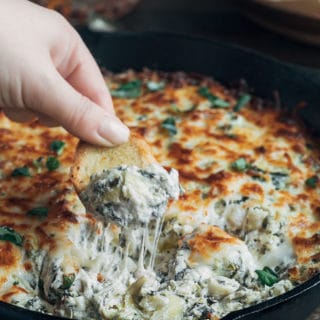 *I use a 12-ounce bag of frozen artichoke hearts, thawed, OR 2 (14-ounce) cans (not marinated; rinsed). Whether using canned or frozen, remove and discard any tough outer leaves before chopping and drain well, pressing out any excess water. **I use BelGioioso 4-Cheese Shred. It’s my longtime favorite for this recipe, and widely distributed at grocery stores. If you’re unable to find it, look for a cheese mix containing Fontina, Provolone, Parmesan, and Asiago.

The dip can be prepped up to a day in advance, stored tightly-covered in the refrigerator until ready to bake. If baking from chilled, add 5-10 minutes to the total baking time.

Calories: 289kcal | Carbohydrates: 9g | Protein: 16g | Fat: 20g | Saturated Fat: 4g | Cholesterol: 23mg | Sodium: 1005mg | Potassium: 291mg | Fiber: 2g | Sugar: 4g | Vitamin A: 4815IU | Vitamin C: 12.7mg | Calcium: 379mg | Iron: 1.2mg
About our Recipes:Please note that our recipes have been developed using the US Customary measurement system and have not been tested for high altitude/elevation cooking and baking.
Keywords: dip recipes, spinach artichoke dip, spinach dip recipe
Have you made this recipe?Don’t forget to leave a comment and rate the recipe below! Take a picture and tag @stripedspatula and #stripedspatula on Instagram for a chance to be featured in our Insta Stories and newsletter!