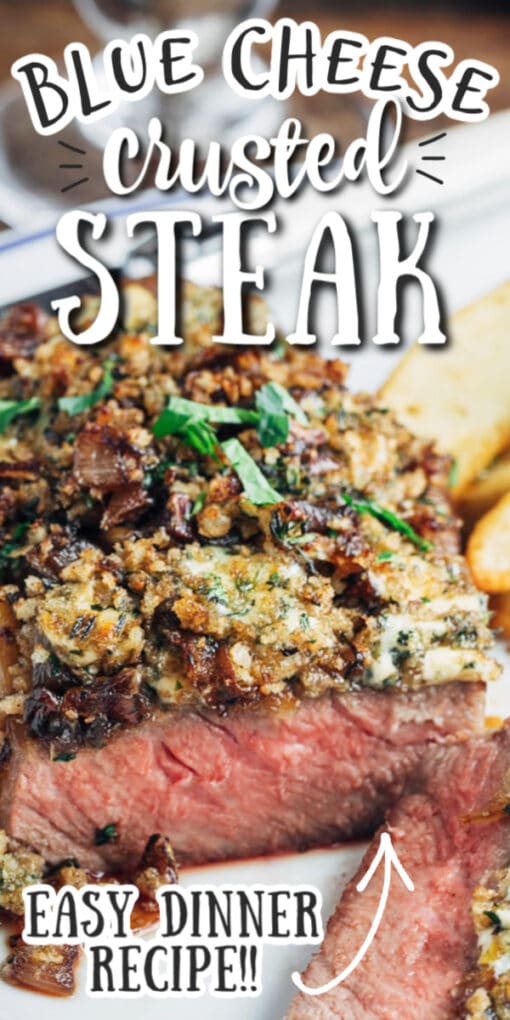 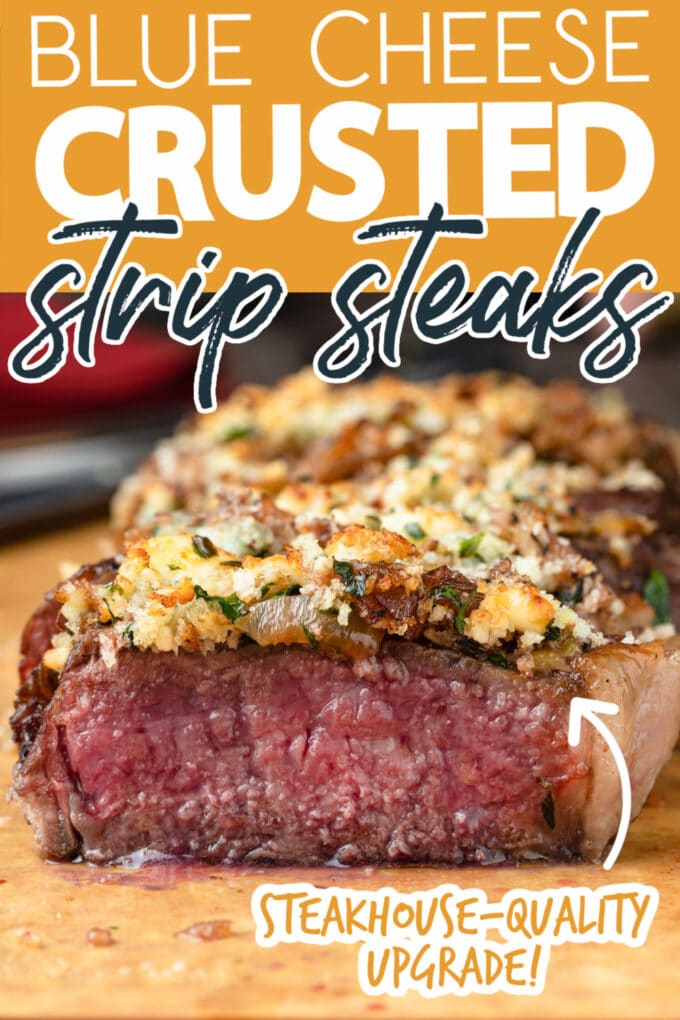 Bring a taste of the steakhouse home with this easy to make Blue Cheese Crusted Steak recipe. With balsamic-caramelized shallots, crispy breadcrumbs, and herbs, this restaurant-quality dish is ready to impress in an hour, prep to table.

This post contains affiliate links. As an Amazon Associate, I earn a commission (at no additional cost to you) from qualifying purchases made by clicking these links. As always, all recommendations and opinions expressed are my own.

I’m usually a minimalist when it comes to a good cut of steak. Just sea salt, pepper, herbs, and a flavored butter on top. That is, unless a Blue Cheese Crusted Steak is on the menu. There’s something so irresistible about the flavor of beef with creamy, piquant blue cheese.

It’s also an incredibly easy upgrade to recreate at home, whether you’re serving it for a dinner party or an intimate dinner for two. Blue Cheese Crusted Steak is one of my go-to recipes for when I want to “wow” without a lot of time to cook.

What Steak Cut Should I Use?

You can make a blue cheese crust with just about any cut of steak. I particularly like it with strip steaks, ribeyes, and filet mignon. The steaks photographed in this post are boneless, center cut, prime Black Angus NY strip steaks.

For a more mildly-flavored cut, like filet mignon, the blue cheese and balsamic shallots in the crust mixture add to the overall flavor of the steak significantly. With something like a strip steak or ribeye that has a bigger, beefier flavor, the crust stands up to the cut and complements it nicely.

Want to brush up on the cuts of meat you’ll find at the butcher counter? Check out Basic Beef Cuts from Certified Angus Beef.

Just like the cut of steak, the cooking method is customizable to your preferences. A blue cheese crust can be added to pan-seared steak, grilled, broiled, and even sous vide.

When you’ve almost finished cooking the steak, pack the blue cheese crust onto the top and pop it in the oven for a few minutes. (Or, if you’re grilling, place it on the indirect heat side of the grill with the lid closed.)

The trick to making sure that your meat doesn’t overcook when you crisp the crust is to cook the steak one level of doneness less than you want to serve it.

So, if you want to serve medium-rare steaks, cook them to the pre-resting temperature for rare and then proceed with the crust. For medium, cook first to medium-rare, etc.

I cooked the prime-grade, 1-1/2 inch NY strip steaks shown in this post to an internal temperature of 120 degrees F by pan searing, added the crust, and baked them in a 500-degree F oven for 4 minutes.  This gave me rosy, medium-rare meat, with nice rendering of the fat marbleization.

The topping for blue cheese crusted steak couldn’t be simpler to make. I like to use Japanese Panko breadcrumbs to help bind the ingredients and give the crust some texture.

Balsamic-glazed caramelized shallots add a nice balance of flavors between salty, tangy, and sweet. To make a more classic crust, you can omit the shallots entirely.

For cleaner slicing when serving, be sure to press the crust mixture onto the top of each steak. Don’t just sprinkle it on. That said, even with proper packing, do expect that some of the crust will fall off of the steak and onto your plate when you cut it; it’s the nature of the dish.

In terms of texture, the top of the crust gets a nice crispiness to it as the Panko toasts. The interior stays soft, with a bit of creaminess from the melted blue cheese.

What Kind of Blue Cheese Should I Use?

I like to use either a classic Danish blue cheese in this recipe or Point Reyes Original Blue. Both of these varieties crumble and melt well, but are not dry.

The pungency of blue cheese can vary significantly by brand, and even between wedge within the same brand. Taste it before adding it to your crust. If your blue cheese is especially assertive in flavor, consider dialing back the quantity to 1/2 cup instead of 3/4.

For the best results, serve the steaks within a few minutes of crisping the crust. The longer the crust sits and has time to mingle with the steak juices, the softer it will become.

Blue cheese crusted steak is delicious served alongside creamy mashed potatoes, roasted potato wedges, or a lightly-dressed side salad. Since the crust is full-flavored, I like to keep the side dishes on the simple side. Let the steak be the star of the show! 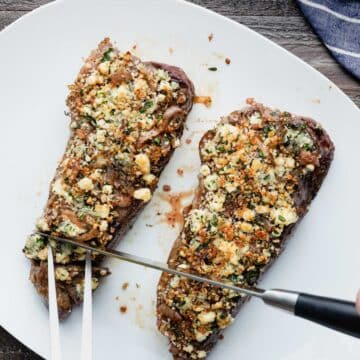 Cooking times will vary depending on the cut and thickness of the steaks, as well as your desired “doneness”. You can also grill, broil, or sous vide the steaks. Whatever cooking method you choose, add the blue cheese crust and transfer to the oven when the steaks are one degree of doneness less than you want to serve them. They will finish cooking in the oven with the crust. If you cooked the steaks closer to its final cooking temperature before adding the crust, don’t worry! Instead of baking in the 500-degree oven, pop the crusted steaks under the broiler for 2 minutes to quickly brown the top and melt the cheese. Watch the steaks carefully–they can burn quickly!

A note on yield:

This recipe makes enough blue cheese crust for two large strip steaks. If you’re using a steak with a smaller surface area, like filet mignon, you’ll have enough for 4 steaks.

Calories: 746kcal | Carbohydrates: 14g | Protein: 56g | Fat: 51g | Saturated Fat: 26g | Cholesterol: 184mg | Sodium: 790mg | Potassium: 817mg | Fiber: 1g | Sugar: 4g | Vitamin A: 795IU | Vitamin C: 7.8mg | Calcium: 276mg | Iron: 5.3mg
About our Recipes:Please note that our recipes have been developed using the US Customary measurement system and have not been tested for high altitude/elevation cooking and baking.
Keywords: blue cheese crusted steak, blue cheese steak, new york strip steak recipes
Have you made this recipe?Don’t forget to leave a comment and rate the recipe below! Take a picture and tag @stripedspatula and #stripedspatula on Instagram for a chance to be featured in our Insta Stories and newsletter!

This post originally appeared on Striped Spatula on February 21, 2019. We updated it in 2021 with new photos and a video.