This Instant Pot Chili recipe combines chunks of tender beef with a smoky chili paste sauce. (No beans.) Using the pressure cooking setting brings Texas-Style Chili to the table in half the time. Perfect for Game Day!

If you’ve been following my Insta Stories over on my Instagram account, you’ve already heard “the news” that I bought an Instant Pot!

Having had an electric pressure cooker in the past, I’d held off on getting one. My older unit was so finicky and inconsistent that I rarely used it for anything more than cooking potatoes. I’ve been reading about the Instant Pot’s multicooker functions everywhere over the past few months, and decided it was time to take the plunge.

The verdict? I like it! While I won’t be breaking up with slow braises in my Dutch Oven any time soon (we’re practically married), the Instant Pot has brought some really delicious meals to my table in a fraction of the time. The first two days alone, I had Osso Buco “on a whim,” Saffron Risotto (no stirring), and Pots de Crème that were the epitome of indulgence.

(If you’re looking for a good Instant Pot cookbook, I highly recommend  Melissa Clark’s Dinner in an Instant, home to all three of the recipes I mentioned above.)

With a certain big football game on the horizon, I decided to try my hand at Instant Pot Chili. Loving how tender the pressure cooker made stew meats, I made a variation on Texas Chili con Carne. I have to say that it was one of the best bowls of chili I’ve ever had.

What is Texas Style Chili?

“Chili” (more specifically, what belongs in chili) can be something of a hot button topic. Styles of chili vary across regions and even households; each recipe equally beloved and defended as the best and rightful bearer of the name. Simply stated: chili is a dish that people are passionate about!

In the great chili debate, the first question to come up is usually whether or not to include beans. (Check out: “To Bean or Not To Bean: Jumping into the National Chili Debate” from National Geographic.) Ask this question in the frame of Texas-Style Chili, and you’ll find a resounding “no.”

Texas Chili (also called “Texas Red Chili”) is generally made with cubed beef, browned in lard or bacon fat, and slow-simmered in a rich chili sauce. That’s it. I’ve seen a few recipes with ground beef, but the overwhelming majority utilize beef chuck cubes. Most recipes contain no tomatoes and most certainly, no beans.

Homemade chili paste gives Texas-Style Chili it’s characteristically deep flavor and color. Some recipes swap out a hearty proportion of chili powder for the fresh paste, with particular devotion to the Gebhardt’s brand.

I strayed just a bit in my adaptation by deglazing the Instant Pot with a little bit of beer after browning the beef and sautéing the onions. I absolutely love beer-stewed meats, and a cold beer and chili are a match made in heaven, so I decided to add a splash to the pot. It doesn’t seem to be an authentic addition, but we loved it.

Made in a cast iron pot or Dutch Oven, Texas-Style Chili is an all-day affair. The process for pressure-cooked chili is similar to slow cooking, but requires less liquid, and a lot less time.

You start by browning the beef and onions in bacon fat, directly in the Instant Pot insert on the “sauté” setting. Be sure not to crowd the pan so that the meat doesn’t steam. Instead of a slow simmer on the stove, the chili cooks with the sauce in 30 minutes on high pressure, with a 10 minute natural steam release.

The beef that emerged was ethereally tender, infused with the flavors of the homemade chili paste. A few tablespoons of masa harina (corn flour) thickened the cooking liquid to a glossy sauce. (If you like a looser sauce, reduce the amount of masa harina accordingly.)

Looking for another beef recipe to make in the electric pressure cooker? Try my Instant Pot Corned Beef! It’s a reader favorite.

This Texas-Style Chili is delicious right out of the pressure cooker, if you have time to let the chili sit overnight in the refrigerator before re-warming and serving, it will be even better. Stir gently so the tender beef cubes don’t break up too much.

(Lesson learned: I manhandled the chili a bit too much as I was moving it in and out of different colored bowls for styling. The Instant Pot Chili was still delicious, but there were fewer large beef chunks when I finally plated it in a bowl I liked than when it was finished cooking.)

Like most chili recipes, this Texas-style version can be served with a number of toppings. We liked it best with a little bit of diced onion, sharp cheddar, chopped cilantro, a squeeze of lime, and a dollop of sour cream. Honestly, it’s so well-flavored you could forego the toppings entirely and have an amazing bowl of chili.

Instant Pot Chili is fantastic served with a cold beer and warmed tortillas or cornbread. No matter who you’re rooting for in the game, the chili on the menu will be a touchdown! 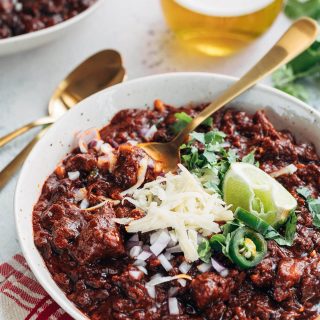 Texas-Style Chili in half the time? Make it in the Instant Pot! This rich and smoky (no bean) chili is perfect for Game Day! (Note that to make this recipe, you'll have to make a batch of chili paste ahead. Recipe linked in the ingredients list below.)
Print Pin Rate Save Saved!
Course: Main Course
Cuisine: American
Prep Time: 10 minutes
Cook Time: 1 hour 15 minutes
Total Time: 1 hour 25 minutes
Servings: 6 to 8 servings
Estimated Calories Per Serving: 561kcal
Author: Amanda Biddle

Calories: 561kcal | Carbohydrates: 15g | Protein: 47g | Fat: 34g | Saturated Fat: 14g | Cholesterol: 168mg | Sodium: 392mg | Potassium: 972mg | Sugar: 4g | Vitamin A: 95IU | Vitamin C: 7.4mg | Calcium: 56mg | Iron: 5.4mg
About our Recipes:Please note that our recipes have been developed using the US Customary measurement system and have not been tested for high altitude/elevation cooking and baking.
Have you made this recipe?Don’t forget to leave a comment and rate the recipe below! Take a picture and tag @stripedspatula and #stripedspatula on Instagram for a chance to be featured in our Insta Stories and newsletter!